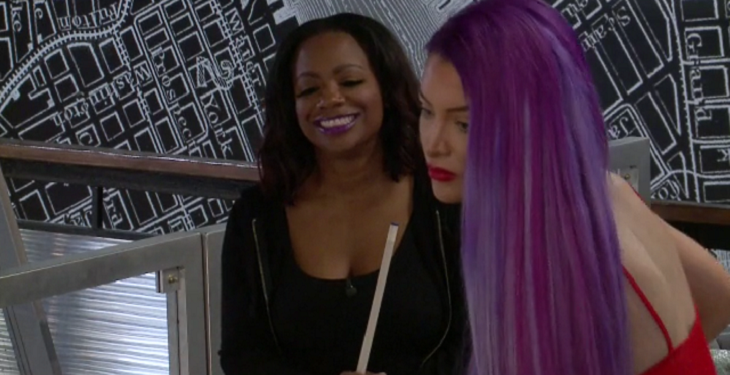 Celebrity Big Brother 2019 Live Feed spoilers tease that the house is divided on who to send out the door on Friday’s first live eviction.  Tamar Braxton is campaigning hard to sent Kandi Burruss home. However, most of the house want Jonathan Bennett to go home instead.  Here’s the rundown of what happened inside the house on Thursday, January 24.

Joey Lawrence said that he was told the votes have to be decided before the eviction show. Kandi informs him that she would rather go home early than last the whole game and not win the grand prize. Joey reminds Kandi that this show could be led to another opportunity and it is a journey.

A Final 4 Deal Made?

Natalie Eva Marie and Kato Kaelin meet in the gym.  Kato confirms that he is committed to keeping her safe moving forward. He pitches the idea of a final four deal with Natalie, Tom Green, and Lolo Jones.

Natalie goes to tell Lolo she made a final two deal for them with Tom and Kato.

Kato tells Kandi he thinks she is safe.  He is pretty sure that Jonathan will be going home.  He mentions that Jonathan played too hard way too soon in the game. Later, Lolo tries to talk to Tamar about Kandi.  Tamar believes that the guy will pick off the girls so it’s in their best interest to stick together. Of course, Lolo agreed and suggests she hash things out with Kandi.  She adds that Kandi would be another number for the girls. Tamar isn’t willing to do that and starts to get upset.

It looks like Jonathan will be going home.  Moving into next week’s nominations, the only two houseguests that are completely safe and not on anyone’s radar is Tom and Kato. Who do you think will go home on Friday night?  Don’t forget to come back later for more Celebrity Big Brother 2019 spoilers, news, and Live Feed Updates!