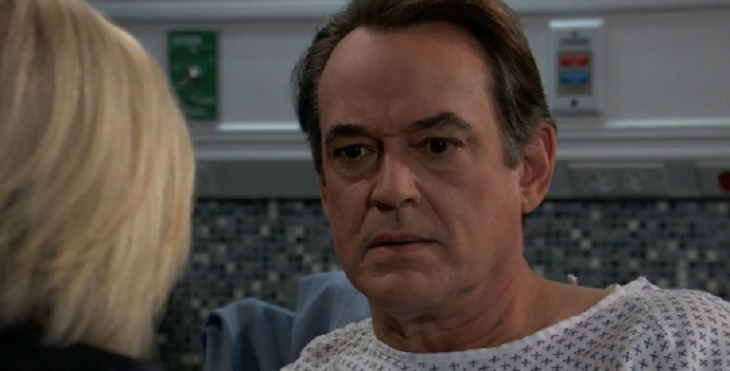 General Hospital (GH) spoilers tease that Laura Collins (Genie Francis) will soon start putting two and two together and realize that she married a very sick man indeed – only she’ll probably still think Kevin Collins (Jon Lindstrom) has taken his previous psychosis of thinking he was his brother to the next level, of actual attacks and possibly killings! Of course, she still doesn’t know Ryan Chamberlain is still alive and impersonating Kevin, and she still doesn’t know the real Kevin is imprisoned in Ferncliff under Ryan’s old name of Todd Wilson.

Her daughter Lulu Falconeri’s (Emme Rylan) attack has sidelined the investigation that she and Carly Corinthos (Laura Wright) had started, and Carly’s been sidetracked as well, with supporting her daughter Joss (Eden McCoy) with dealing with her boyfriend Oscar Nero’s (Garren Lake Stitt) terminal brain tumor and husband Sonny Corinthos (Maurice Benard) with the difficult decisions regarding care for his father Mike Corbin (Max Gail). However, Sonny himself has made himself available to support Laura and Lulu.

Laura waits by Lulu's side as her daughter fights for survival. Watch today's full episode of #GH – RIGHT NOW – without a login: https://t.co/b7Q3x3NTP8 #GH55

As of yet, even though there was a discussion between Laura and Carly about patient “Wilson” and “Wilson Ritter”, neither one made a connection to the name Ryan Chamberlain used in Texas, “Todd Wilson”. Even Lulu had not made the connection and neither had she allowed for Ryan still being alive and impersonating Kevin, even when he made strong hints to her just prior to the attack! This is the one connection that is vital to make to truly solve this case; the one person who needs to hear the name “Wilson” is Felicia Scorpio (Kristina Wagner)!

However, even if that connection is never made in the investigation, Laura will still pursue Kevin and his connection to Lulu’s attack, once Lulu is able to ID him. Whether she can force herself to believe he killed Kiki Jerome (Hayley Erin) and Mary Pat Ingles (Patricia Bethune) is another story! Keep tuned in to General Hospital and keeping up with General Hospital spoilers frequently, to see how Laura closes in on Ryan!