Days Of Our Lives Spoilers: Chad Saves A Kidnapped Charlotte– Is Gabi Guilty Of Taking Her? 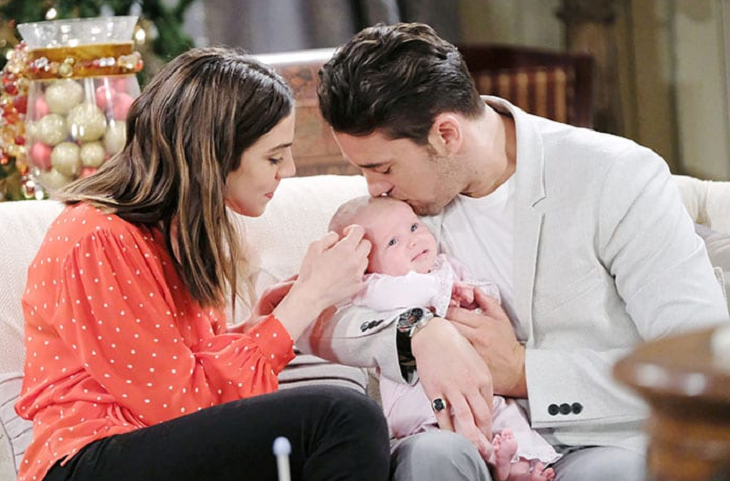 Days of Our Lives (DOOL) spoilers tease that baby Charlotte DiMera (Chloe Teperman) will be kidnapped in the next few weeks, throwing parents Abigail (Kate Mansi) and Chad DiMera (Billy Flynn) into a panic. Chad will soon undertake the search for Charlotte himself, apparently bypassing the help of the police.

Of course, Chad’s prime suspects will be Stefan DiMera (Tyler Christopher) and Gabi Hernandez (Camila Banus). But Stefan will have moved Chloe Lane (Nadia Bjorlin) and possibly her children into the DiMera mansion by that time, to protect them, and Chloe in particular, from an unknown assailant or assailants, who other Days of Our Lives spoilers tease are probably associates of the late Mateo aka El Fideo (Aldoni Garcia) who threatened to hunt her down after she killed Mateo in self-defense. It would make no sense for Stefan to try to hide Charlotte in the mansion when he is protecting house guests. Even the DiMera mansion isn’t big enough to hide a small baby who will need frequent diaper changes and feedings.

Next, he will likely target Gabi as the culprit; however, why would Gabi kidnap Charlotte after Abby forgave her and refused to press charges? Besides, why would Gabi put herself in a position of being prosecuted for kidnapping, when she doesn’t want Arianna (Harper and Sydnee Udell) to be without her mom again? So, who else could it be? Who would kidnap Charlotte, and for what reason? It can’t be for money, Chad just resigned as co-CEO of DiMera Industries and doesn’t have a job, and Abby is a stay at home mother. The Deveraux family isn’t made of money either.

Another kidnapping of a Salem resident will have recently taken place by the time Charlotte is missing, of Ciara Brady (Victoria Konefal) and Ben Weston’s (Robert Scott Wilson) sister, Jordan Ridgeway (Chrisell Stause Hartley) appears to be responsible for her kidnapping, supposedly to protect her from Ben. It sounds like insanity runs in their family because that makes no sense! But Jordan and Abby will have had a conversation about Ben, possibly in the Deveraux home where Abby and the children are staying, and that may be when Charlotte goes missing.

So why would Jordan kidnap Charlotte? It turns out she used to have a thing for Chad, and Chad betrayed her by goading Ben into beating up his father/her stepfather Clyde Weston (James Read)! Maybe she’s trying to get back at Chad for that, or she’s fearful that Chad too would sexually abuse Charlotte when she gets older, like Clyde abused her, and thinks she’s protecting the baby.

Days Of Our Lives Spoilers: Jack Battles Melinda For Mayor, Will Eve Play Dirty To Get What She Wants?

Days of Our Lives spoilers say that Chad rescues Charlotte and brings her back to Abby, making him her hero and ushering in the little family’s happily ever after and moving away from Salem; stay tuned to Days of Our Lives and keep an eye on DOOL spoilers to see the latest developments and news!