General Hospital Spoilers: Ava Shocked, Learns Franco Could Be Connected To The Murders! 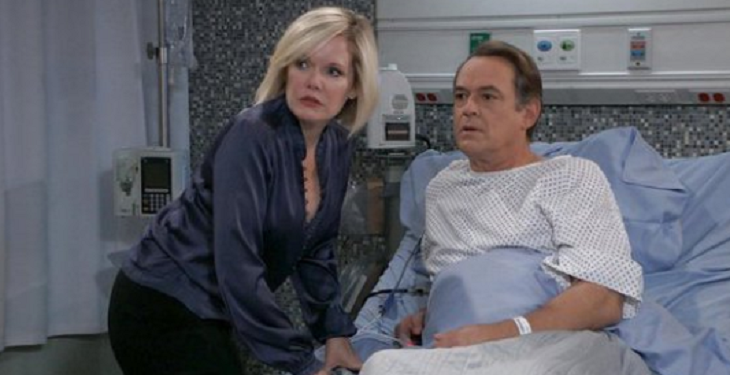 General Hospital (GH) spoilers tease that Ava Jerome (Maura West) will be stunned to learn that old friend Franco Baldwin (Roger Howarth) will soon be a person of interest in the serial killer murders, thanks to the framing efforts of none other than her boyfriend “Kevin Collins” who’s really his twin brother Ryan Chamberlain (Jon Lindstrom)!

Ava will probably find it very difficult to believe that Franco could be involved in Kiki Jerome’s (Hayley Erin) murder in particular; after all, for years thanks to Ava’s lies, Franco believed he was her birth father, and the two shared a father-daughter type relationship right up until the end. Franco will talk to “Kevin” for advice about Aiden Webber (Jason David) and the bullying situation in the next two weeks. A couple of days after that conversation will find himself being questioned by the police, if not actually arrested.

It’s obvious that Ryan used the meeting with Franco to try to get something to frame him with; since he previously dumped Franco as a patient of Kevin’s, it’s doubtful it would be in his office, but other General Hospital spoilers tease that possibly Ryan thought ahead and planted suspicious notes in his file, which he had removed, maybe calls the tip line and gives false leads from a burner phone (throwaway cell phone that cannot be traced) and planted evidence such as Ryan’s drivers’ license collection from the last three attacks in Franco’s art studio in GH where he does art therapy. Possibly during this latest conversation, he is able to record the conversation and maybe re-edit Franco’s words to sound like a confession!

GH Spoilers– Ryan Meets With Franco To Frame Him

Even if this turns out to be a very weak frame, and the police don’t quite buy it, because of Franco’s serial killer history they do have to take it seriously and follow up on it; Franco may be held for a couple of days while they investigate the leads. However, other General Hospital spoilers for February sweeps say that Jordan Ashford (Briana Nicole Henry) comes up with a plan to flush out the true serial killer and take him down, so Franco may be released quickly. Stay tuned to GH and keep checking General Hospital spoilers on an ongoing basis to see the latest developments in the serial case and other exciting storylines!