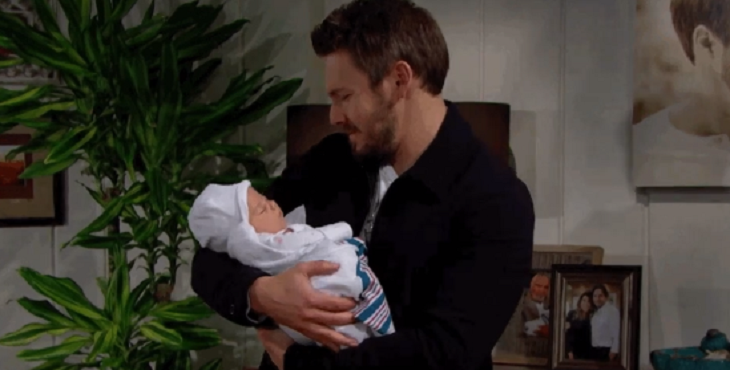 The Bold and the Beautiful (B&B) spoilers for Tuesday, January 29, tease that Liam Spencer (Scott Clifton) will come to a decision. He’ll decide that it’s time for Hope Spencer (Annika Noelle) to know about Steffy Forrester’s (Jacqueline MacInnes Wood) adoption plans. Hope has been aware that Steffy was thinking about adopting, but she has no idea the process is moving along so quickly.

Liam’s just visited with Steffy, Kelly Spencer (Chloe Teperman and Zoe Pennington), and the baby who will soon become Phoebe Forrester (Rosalind Aune and Isabella de Armes), and he knows now that Steffy is serious about adopting right away. So, he’ll muster the courage and tell Hope the whole story about the amazing and sudden adoption opportunity that fell into Steffy’s lap.

Hope won’t be happy about the news, which will hit her hard. B&B spoilers say that she’ll be horrified at the thought of Steffy bringing home a new baby right now when she’s in the depths of grief over losing Beth Spencer. She may think that it’s cruel for Steffy to bring a new baby into the family so soon after Beth’s death.

Hope will try to process the news, but it will likely take some time for it all to really sink in. Hope already feels like she’s living a nightmare due to Beth’s death, and the news of a new baby in the family that’s not hers will probably compound her pain. She may even lash out at Liam for supporting Steffy with her new addition.

BOLD Spoilers–Flo Struggles With Her Feelings

Meanwhile, on the new B&B episode on Tuesday, January 29, Florence “Flo” Fulton (Katrina Bowden) will do some soul-searching. She’ll think about everything that Reese Buckingham (Wayne Brady) has done, and she’ll start to feel overwhelmed. She’ll feel especially bad that that baby’s real parents have been led to believe that their baby died.

And Flo will realize that she’s now heavily involved in the wrongdoing herself. She’ll feel guilty about what she’s doing, but she’ll also think about the reasons why Reese has done everything he has done. He just wants to keep his daughter Zoe Buckingham (Kiara Barnes) safe, and he had no other way to pay off his debt than to sell a baby.

So, although Flo will feel great remorse, she’ll resign herself to keep going through with Reese’s plan. She won’t be happy about all the deception and the pain that the birth parents must be going through, but she’ll ultimately agree with Reese that Zoe needs to be protected.