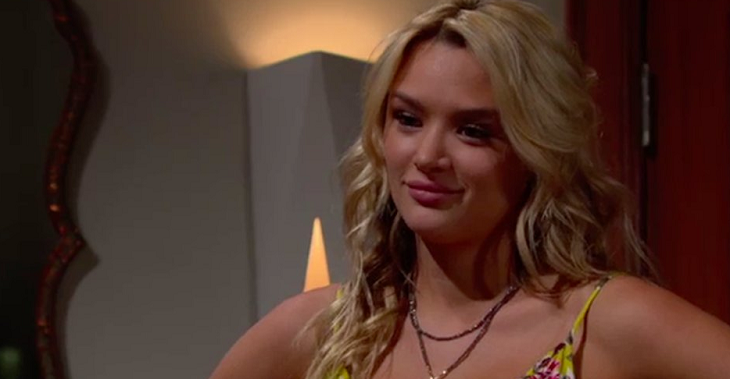 The Young and the Restless (Y&R) spoilers for Tuesday, January 29, tease that Summer Newman (Hunter King) will return to Genoa City. She’s come back to reunite with Kyle Abbott (Michael Mealor), and although Kyle is still very attracted to his ex, he’s currently in a committed relationship with Lola Rosales (Sasha Calle).

Kyle is surprised to see Summer, as she steps off the elevator at Jabot, and he asks her why she left Dubai. Summer says it was a last-minute decision, and they need to “clear the air”. She regrets the pressure she had put on him but says she now has a new outlook on their relationship. Summer brags about how well she’s doing in her new job and invites him out to dinner so she can tell him more. Kyle prudently declines.

Back at the Abbott household, Jack (Peter Bergman) sits Kerry (Alice Hunter) down to tell her he looked in her purse during Abby and Arturo’s engagement party. She says she’s been giving herself hormone injections so she can freeze her eggs, in case she wants a child someday. Jack tells her he may not be the right man for her.

Phyllis (Gina Tognoni) leaves a voicemail for Nick (Joshua Morrow), but he’s at Sharon’s (Sharon Case) house, interrogating her about why she’s lied to him for months about J.T.’s murder. Sharon admits she almost told him her secret right before their wedding, but the other members of The Coven talked her out of it.

Shick then rehashes the night Sharon left her engagement ring on the table, where Nick could find it. Nick believes if Sharon had come to him about her part in covering up J.T.’s murder, they might still be together.

Nick returns home and tells Phyllis he’s grateful his “tough as nails” girlfriend was there the night of the murder, to help his sister and his mother. Phyllis and Nick start making out and Summer walks in and announces she’s moving in with them.

Green with envy, Mia Rosales (Noemi Gonzalez) reads social media posts about Abby (Melissa Ordway) and Arturo’s (Jason Canela) engagement. Her doorbell rings and Abby is standing there, smiling, hold a bouquet of flowers. Abby apologizes for Arturo interrupting Mia and Rey’s (Jordi Vilasuso) wedding renewal with his proposal. She also reminds Mia of her hurtful comments at the engagement party the night before, which were fueled by jealousy and too much red wine. She asks Mia for a fresh start.

Over tea, the two spend an uncomfortable few minutes discussing Arturo. Mia offers to do Abby’s hair and makeup. With an evil grin, she fantasizes about cutting off all of Abby’s hair.

Young And The Restless Spoilers– Katie Is Kidnapped?

At the Newman Ranch, Victoria (Amelia Heinle) and daughter Katie (Sienna Mercuri) visit Victor (Eric Braeden), who asks her to take over his position at Newman while he is under house arrest and Victoria accepts. Summer arrives and Victor asks her if she would assist Victoria in taking over his duties at Newman. Victoria is not pleased.

Later, Victor and Victoria notice Katie is missing and start looking around for her.
“Shh, I won’t tell,” Katie says to her invisible friend, just before her mother and grandfather find her in the hallway.

The Young and the Restless Spoilers: Victor Deserves Good Press – Sympathy For The Moustache

On Wednesday’s episode, spoilers show that Summer will reconnect with an old friend. We’ll give you updates as other news comes in. Stay tuned to the CBS soap and don’t forget to check Hollywood Hiccups often for the latest Young and the Restless spoilers, updates, and news.