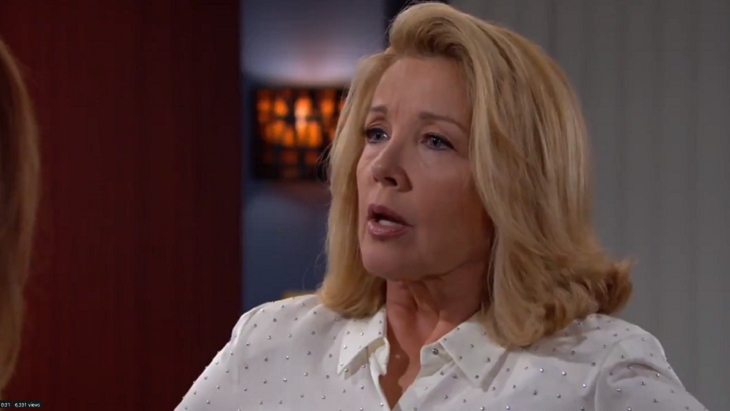 The Young and the Restless (Y&R) spoilers for Thursday, January 31, tease that Nikki (Melody Thomas Scott) will fall asleep while babysitting Katie (Sienna Mercuri) and her granddaughter will go missing.

Y&R Spoilers– Katie Has A Friend

At Newman Ranch, Nikki is with Katie, who asks her if she wants to meet her new friend. Nikki doesn’t hear her because she’s looking at a news report about J.T. on her tablet and then reliving his murder in her mind.

She promises Katie a day full of hot chocolate, cookies and feeding horses in the stable. As she takes her granddaughter by the hand, Katie’s invisible friend is watching them on the surveillance camera.

At Jabot, Lauren (Tracey E. Bregman) asks Kyle (Michael Mealor) if the Fenmore photo shoot is ready to go. He tells Lauren they have a photographer and models waiting. Then he gets a text, telling him the models for the shoot are stuck in New York.

Meanwhile, at Victoria’s (Amelia Heinle), she comes downstairs to find Billy (Jason Thompson) sitting in her living room. He wants to discuss their relationship. Victoria tells him she has nothing to say.

As usual, they get into an argument. Billy tells her he was out of line during their last conversation and that he hadn’t used her to make Phyllis (Gina Tognoni) jealous and she’s never been his second choice.

“You think I’m a cold, heartless bitch,” Victoria tells him. Billy denies this. He pleads with her to give him another chance. She tells him to leave.

Nick (Joshua Morrow) and Phyllis are at home, getting ready to go to work. They start kissing but are interrupted by Summer (Hunter King). She asks her parents if their relationship is casual or “something more.”

Phyllis tells Summer they don’t know “what the future holds” but that they love each other. Summer says she’s happy for them but wonders if they’re both just rebounding.

Summer and her parents then have a conversation about Victor being accused of murdering J.T. and Summer wonders aloud who really did kill him. Phyllis later tells Nick she feels terrible that she’s lying to her daughter.

Ana (Loren Lott) and Fen (Zach Tinker) are at Crimson Lights, trying to write their new song and once again Fen is distracted and is more interested in his cell phone than doing any work. Frustrated, Ana grabs the phone out of his hand.

Kyle is also there, scrambling to find new models for the photo shoot. He spots Ana and Fen and asks if she has any contact names for Devon’s modeling agency. Ana tells him that the division is now defunct.
Fen brags about his awesome evening with Summer (which viewers know never really happened) and he and Kyle start arguing.

Ana tells Fen he’s not taking the music business seriously and he’s only into being a star. When Fen’s phone rings again, Ana storms out of the café. He answers his phone and says, “You want me to do what?”

Turns out the phone call he received was from Lauren, hiring him as a model! Kyle is shocked when he sees Fen at the Fenmore photo shoot but then suggests that he filled in for the other missing model. Kyle and Fen preen for the camera and the photo shoot is deemed a success.

Nick arrives at the ranch and asks his mother how she’s doing. Nikki tells him she can’t stop thinking about J.T.’s murder and she’s worried Victor (Eric Braeden) will end up going to prison for a crime she committed. She wants to admit her guilt and Nick asks her to promise him that she won’t confess.

Nick leaves and Nikki tells Katie to play for a while and they’ll go out for a walk later. She curls up on the couch with a blanket and falls asleep. Soon after, Nikki wakes up when a coffee mug smashes to the floor beside the couch. Then we see someone’s shadow leaving the room. Nikki starts calling for Katie but she’s nowhere to be found!

Y&R fans won’t want to miss Friday’s action-packed episode. We’ll give you updates as other news comes in. Stay tuned to the CBS soap and don’t forget to check Hollywood Hiccups often for the latest Young and the Restless spoilers, updates, and news.