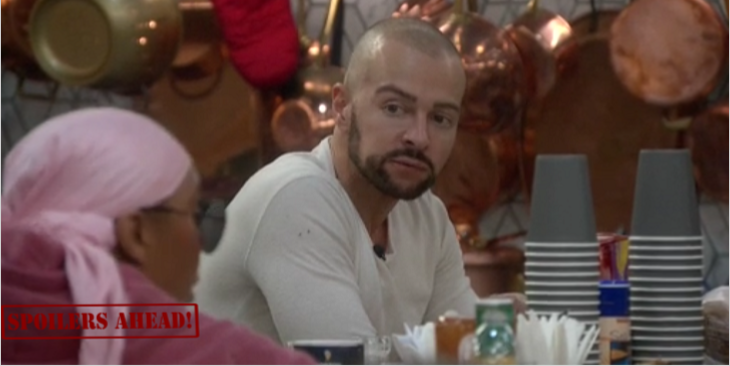 Celebrity Big Brother 2019 (CelebBB) spoilers tease the Power Of Veto meeting took place on Thursday, January 3. The current Head of Household hoped that the POV would be used to save one of the nominees, so he can take a shot at Ricky Williams.  Did it work out as Tom and Kato Kaelin planned?

Joey Lawrence, who is on the block, decided to start playing the game. He flipped the whole house (nearly) against Tom and Kato.  He said that they are controlling the game and if they don’t do something, they will cruise to the end of the game.

Joey’s plan was to put them up against each other, forcing them to turn on each other. At first, Lolo Jones and Natalie didn’t like the idea. They felt terrible turning on them and joining a side alliance with Lawrence. However, Joey made a few good points and he convinced them to mull over the idea.

Natalie had to decide whether to use the Veto or not.  She considered saving Joey, but she knew Ricky or Tamar Braxton would be nominated in his place.  She decided to keep the nominations the same.  Kandi Burruss or Joey will be going home on Saturday.

The eviction plan was shifted. instead of targeting Ricky, Tom and Kato decided to turn their attention to getting rid of Joey.  However, it will be a hard sell as Joey flipped the house against the power duo on Wednesday night.

Celebrity Big Brother 2019 Spoilers: POV Plans Reveal A Ballsy Move By Tom Green, Can He Pull It Off?

Who do you want to go home, Joey or Kandi?  Don’t forget to come back later for more Celebrity Big Brother 2019 (CelebBB) spoilers, news, and Live Feed updates!