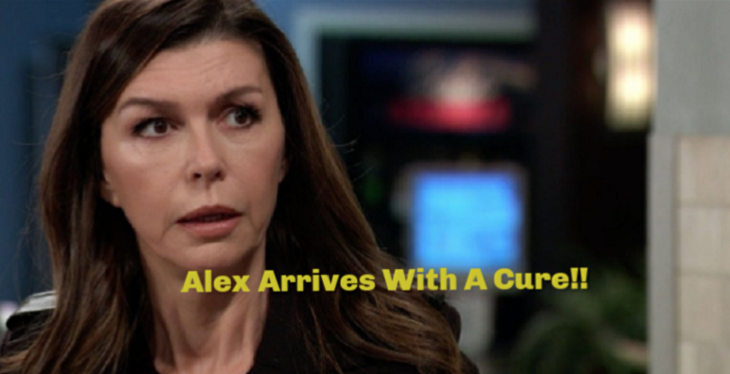 General Hospital (GH) spoilers tease that Alexandra Devane Marick (Finola Hughes) may be making a visit to Port Charles soon in connection with the blindness virus that her twin Anna, and twins Ryan Chamberlain (Jon Lindstrom) and Kevin Collins have suffered recently. The way the virus works seems to indicate Alex may have had a bout with it as well. Even if she doesn’t show up in person, Anna will undoubtedly contact her by phone. It’s also possible that Finn (Michael Easton) and Robert Scorpio (Tristan Rogers) may pay her a visit when they leave on their investigative adventure.

Other General Hospital spoilers tease that soon Jason Morgan (Steve Burton) will also suffer the same syndrome, and the way the virus has worked so far, Drew Cain (Billy Miller) will get it at the same time! This could bring Oscar Nero’s (Garren Lake Stitt) brain tumor into a conversation since Jason and Drew will be brought into the virus investigation. Alex is a neurologist, and perhaps she knows of a procedure or cure for Oscar from “across the pond” as British people say, that hasn’t been tried or publicized in the United States.

Anna, Robert and Finn know "Kevin" lied to them about his involvement with the WSB. What will it take to get the truth out of him? #GH55
An all-new #GH starts RIGHT NOW on ABC! @finolahughes @tristanrogers pic.twitter.com/vO0DPyx7iM

True, both Dr. Kim Nero (Tamara Braun) and Dr. Terry Randolph (Cassandra James) have scoured their online resources and not come up with anything else (at least not anything else they trust) for Oscar. But Alex could have access to procedures or drug protocols in Great Britain or Europe that they don’t. General Hospital viewers will remember that the plastic surgery procedures that restored Ava Jerome’s face after her horrific burns were not known of or used in the United States either, so a protocol or procedure for brain tumors thought to be inoperable may be possible too.

If Finn and Robert pay Alex a visit, or she comes to Port Charles, detailed information on the procedure or protocol could be available to bring into Oscar’s case. February sweeps are ahead shortly, and it’s possible that three major storylines, Ryan, Oscar’s tumor, and the blindness virus investigation could intertwine and their mysteries could be solved soon! Stay tuned to General Hospital and keep checking General Hospital spoilers frequently to see exciting drama and mystery!