The Bold and the Beautiful Spoilers: Friday, February 1 – Brooke Worries About Hope – Reality Sinks In For Flo 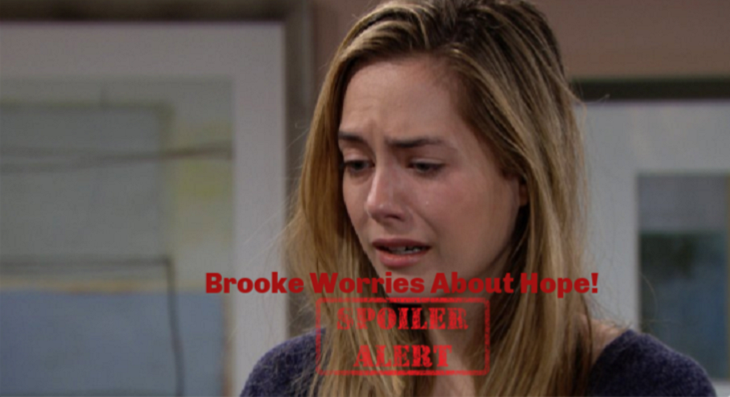 The Bold and the Beautiful spoilers for Friday, February 1, tease that Hope Spencer (Annika Noelle) will be feeling alone after Liam Spencer (Scott Clifton) goes to be with Steffy Forrester (Jacqueline MacInnes Wood) as she welcomes home her new adopted baby Phoebe Forrester (Rosalind Aune and Isabella de Armes). Hope urged Liam to go be with Steffy, Phoebe, and Kelly Spencer (Chloe Teperman and Zoe Pennington), but still, she’ll be feeling left out.

B&B Spoilers– Hope Pushes Liam To Be With Steffy

Brooke Forrester (Katherine Kelly Lang) will be there to comfort her daughter, and it looks like she’ll give her daughter a much-needed pep talk. Brooke won’t be entirely comfortable with Liam going off to be with Steffy and her new family while Hope sits alone at the cabin and misses her own daughter. Brooke will probably point out that Hope needs to spend as much time with Liam as she can right now as she grieves for Beth Spencer.

But Hope will likely defend her decision to encourage Liam to be with Steffy, Kelly, and Phoebe. She’ll probably point out that Liam is destined to be a father-figure for Phoebe, and that she’s not going to do anything to get in the way of that relationship. Still, Brooke will likely remain adamant that Liam’s place right now is by Hope’s side.

Meanwhile, on the new B&B episode on Friday, February 1, Reese Buckingham (Wayne Brady) will be feeling a bit lighter. He’s just paid off his Las Vegas debt, and he’s ready to move on to brighter horizons. He’d like to put the whole baby swap and adoption mess behind him and go on with his life.

On Friday’s episode, Reese will share his future plans with Florence “Flo” Fulton (Katrina Bowden), which most likely include getting out of Los Angeles and starting over somewhere else entirely. But Flo won’t be feeling so optimistic about her future. She’ll be feeling overwhelmed by the reality of what she’s done.

Flo will likely start to wonder about baby Phoebe’s real parents and what they are going through, believing that their baby died. This will weigh heavily on her mind, as well as Reese’s kidnapping and her own perpetration of a fraudulent adoption.

Bold And The Beautiful Spoilers: Ridge Hides The Truth About The Adoption From Brooke And Hope, Helps Steffy Keep Beth?

Reese will probably do his best to calm Flo’s nerves, as he won’t want her changing her mind and spilling the beans to anyone about what she helped him do. He’ll encourage her to take her share of the money and go on with her life like nothing’s happened. But will she be able to do so?