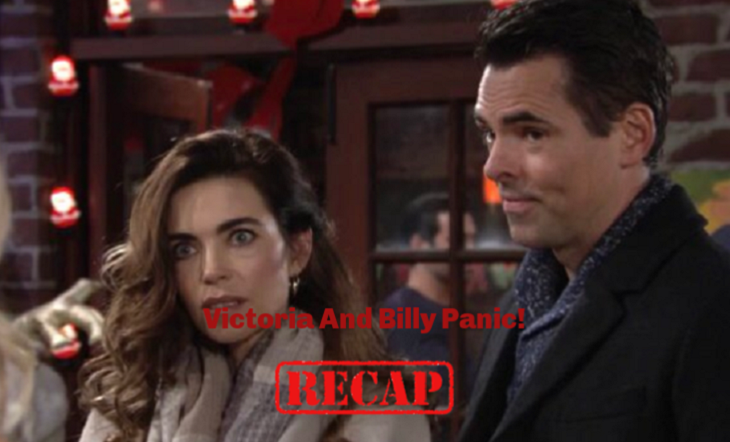 Young and the Restless (Y&R) spoilers for Friday, February 1 tease that the fallout from Nikki’s (Melody Thomas Scott) ill-timed nap and Katie’s (Sienna Mercuri) subsequent disappearance will have widespread ramifications on the Newman clan.

At Newman Ranch, Victor (Eric Braden) comes downstairs and finds a panicked Nikki calling out for Katie. He finds out his granddaughter is missing, makes a phone call and puts the ranch on lockdown.

Victoria (Amelia Heinle) gets to the Ranch and asks if they have found her daughter. Nikki says she believes someone is in the house.

“Has Katie been kidnapped?” Victoria asks, frantically. She begins to call out for her daughter and asks her parents if they have called the police.

Nick (Joshua Morrow) arrives and Nikki asks him to help check the Ranch security footage because she suspects someone else is in the house.

Y&R Spoilers– Mia’s Out Of Control

Mia (Noemi Gonzalez) walks into Crimson Lights and she spots Arturo (Jason Canela), who is still angry about how she acted at his engagement party to Abby and he says he’s not going to let her ruin his life. Her excuse is that she was a “little tipsy.”

She admits she was jealous when he proposed to Abby (Melissa Ordway), but not because she still has feelings for him, it was because she prefers to be the center of attention. Mia promises her bad behavior won’t happen again. Arturo is skeptical.

At the Abbott estate, Lola (Sasha Calle) is still stressing out over her preparations for the new restaurant. Kyle (Michael Mealor) asks her to close her eyes, puts on some music and leads her to a take-out sushi lunch.

She wonders if the lunch is because Summer (Hunter King) is back. She asks if he’s trying to convince her that their relationship is in a good spot or if he’s trying to convince himself that Summer can’t get to him. Kyle admits he’s on alert because Summer is a “wrecking ball”. Lola says she’s worried that Summer wants him, and she can give him what she can’t. Kyle says he doesn’t want Summer, he wants her.

Meanwhile, at Jabot, Phyllis (Gina Tognoni) tells Billy (Jason Thompson) that Summer has returned from Dubai and is staying. Phyllis says she wants him to leave her kid alone, or she will burn him to the ground. Billy starts asking for her advice about Victoria she tells him she’s not his therapist, she’s his boss.

Mia arrives to work on Phyllis’ hair and makeup for a presentation. Phyllis congratulates her on her vow renewal. Mia says she and Rey (Jordi Vilasuso) are happy, but Phyllis says: “not as happy as you wish you were,” and asks if it has anything to do with Arturo.

Crying, Mia tells Phyllis that when she thinks of her first love, Arturo, marrying Abby, she’s worried because Abby won’t make Arturo happy. Phyllis advises her not to cause trouble for Abby and Arturo and to focus on Rey.

Outside Rey’s apartment, Rey runs into Arturo and invites him upstairs for a beer.

Once they get to his apartment, Rey tells Arturo that Abby is fantastic, but he is worried about how she comes from “two brand name families.” He’s also concerned about what will happen when Abby’s father Victor goes to trial, but Arturo tells him he and Abby can handle it.

Back at the ranch, Victor and Victoria can’t find Katie and Nick says there was no sign of anyone else on the property. Victor says if it was the same person who placed the evidence, they know where the security cameras are. Victoria calls Billy and asks him to come to the ranch ASAP.

Once Billy arrives, he blasts them for not calling him sooner. Victor gives it right back and yells at him to stop his accusations. Nick suggests to him that Katie could have just wandered off.

“I had a daughter wander off once before and I ended up putting flowers on her grave,” Billy says. Then he tells them he cannot lose Katie like he lost Delia.

He’s also upset they didn’t call the police and pulls out his phone to call but Victor tells him to put it down. Billy and Victoria then argue about whether the police should be called and as Billy is about to call them, they hear Katie’s voice, echoing inside the walls.

The Young And The Restless Spoilers: Devon Grows More Suspicious Of Ana, What Is She Really Hiding?

Will Katie be found safe and will her invisible friend be revealed? We’ll give you updates as other news comes in. Stay tuned to the CBS soap and don’t forget to check Hollywood Hiccups often for the latest Young and the Restless spoilers, updates, and news.