Of course, as Hope holds Phoebe, she’ll naturally think of Beth Spencer, but her feelings won’t be focused on despair or grief. Rather, she’ll feel hope for the future, and she’ll experience feelings of healing, much like Liam did when he held Phoebe for the first time.

Hope wrestled with the decision of whether to go to Steffy Forrester’s (Jacqueline MacInnes Wood) house to see Phoebe. She thought it might cause her more grief, but ultimately she decided to just take the plunge and help welcome Phoebe to the family. And it looks like she’ll be glad she did, as she’ll find herself absolutely enchanted with Phoebe. 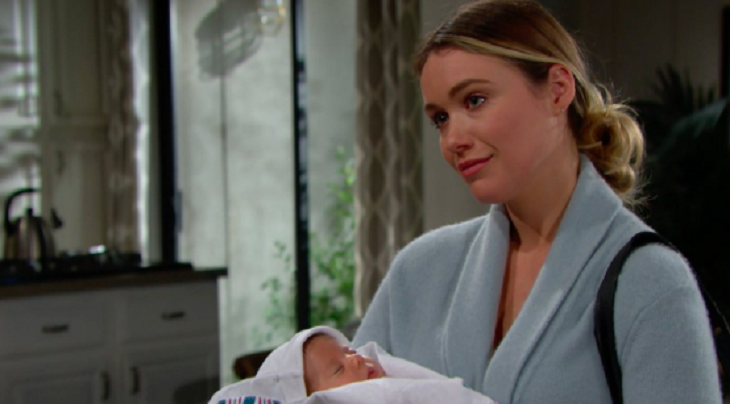 Meanwhile, on the new B&B episode on Monday, February 4, Zoe Buckingham (Karina Barnes) will get some unsettling news from her father Reese Buckingham (Wayne Brady). Reese will share with Zoe his plans to leave the country immediately and move to England.

This will send up all sorts of red flags for Zoe, who has been keenly aware of her dad’s strange behavior in recent weeks. Reese has spent weeks trying to convince Zoe that nothing’s wrong and there’s no reason to worry, and now he’s suddenly leaving the country. It will seem highly suspect.

Zoe will question Reese about the sudden move, but he’ll likely be his usual circumspect self and offer no clues about the motivation for his decision. This will lead Zoe to start her own investigation into her dad’s situation. In the coming days, look for Zoe to take matters into her own hands and try to get to the bottom of what Reese has been up to.

Bold And The Beautiful Spoilers: Ridge Hides The Truth About The Adoption From Brooke And Hope, Helps Steffy Keep Beth?