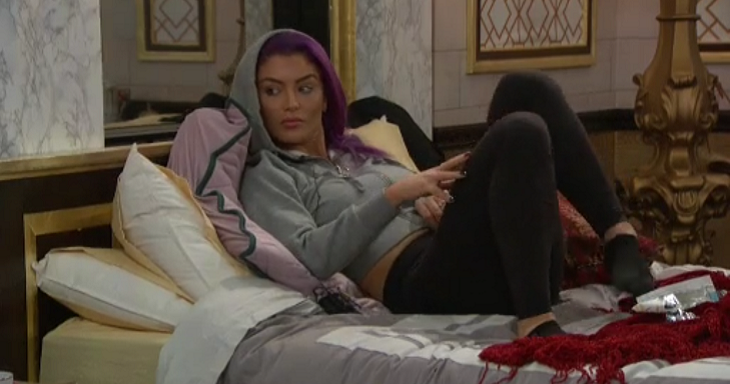 Celebrity Big Brother 2019 (BBCeleb) Live Feed spoilers tease that the alliances in the house have shifted over the past 48 hours.  Two days ago, it was a sure thing that Joey Lawrence would walk out of the house. Now, it is looking like Kandi Burruss will be the one to be evicted on Saturday’s eviction.

One of Kato Kaelin and Tom Green’s big mistake this week was not being able to use the Power of Veto and backdoor Ricky Williams.  Their plan was to remove Joey from the block and renominate Ricky.

What happened when @tomgreenlive gave Live Feeders their own private show? You just gotta see for yourself: https://t.co/q4fRPJwjTS #BBCeleb pic.twitter.com/PjQDwGa6o8

Natalie Marie Eva won the POV and she chose not to use it, which left the nominates the same. Natalie did not want to get rid of Ricky.  She made it clear that she wouldn’t allow Tom to tell her to use the Veto.  And, she proved that when she refused to use it.  Joey and Kandi are the final nominations for Round 3.

CBBUS Spoilers— Joey Is Used As A Number

Joey has spent much of the season so far not being a player in the game. Natalie Lolo Jones, Tamar Braxton, and Ricky decided that Joey was useful to their game.  Mostly, they figured out they needed him to get Tom and Kato out of the game.

The plan to get rid of team Tomato depends on whether Tamar will vote her friend Kandi out on Saturday evening. If she decides not to vote Kandi out, it will be a tie. That would give  Tom the power to decide who he wants to keep.

If Kato doesn’t win the HOH competition, he and Tom will go on the block against each other.

Do you think Tamar will vote Kandi out?  Who do you want to win HOH for Round 4?  Don’t forget to come back to Hollywood Hiccups for more Celebrity Big Brother 2019 (BBCeleb) spoilers, news, and Live Feed updates!