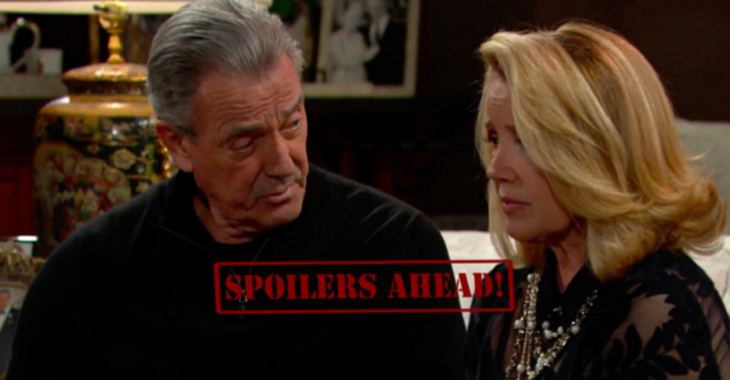 The Young and the Restless (Y&R) spoilers for Friday, February 8 indicate that as Christine (Lauralee Bell) and Rey (Jordi Vilasuso) arrive at Newman Ranch to take Victor (Eric Braeden) to court, Nikki (Melody Thomas Scott) will say there won’t be a trial because she has something to tell them.

Mia (Noemi Gonzalez) is making Rey breakfast at their apartment, in preparation for his big day. He tells her he must go over to the Newman Ranch in order to escort Victor to prison. Christine calls and Mia says she wishes Rey didn’t have to take a back seat to Christine in front of the cameras.

At Nick’s (Joshua Morrow) place, Phyllis says that considering the evidence Christine has, she’s worried the DA will go after him too.

Sharon and Mariah are at the cottage, discussing the romantic aspect of what Victor is willing to do for Nikki.

“Am I hallucinating, or did you just praise Victor for being noble?” Mariah says. Sharon tells her daughter that if Rey knew the real story, he wouldn’t want to be involved. Mariah starts to worry that Sharon is going to confess to her part in covering up J.T.’s murder.

Mariah tells her she’s not responsible for JT’s (Chad Luckinbill) death and begs her not to destroy her life, saying her children need her. Sharon then gets a text from Nick saying he’s calling a family meeting.

Meanwhile, at the Abbott estate, Arturo (Jason Canela) comforts Abby (Melissa Ordway). She says she’s not sure how she’s going to get through the day. She tells Arturo that it occurred to her that if her dad gets convicted, he won’t be able to walk her down the aisle.

Victoria arrives at Nick’s and he says Sharon is on her way and that he didn’t invite Nikki. Abby arrives shortly after and tells them she has a plan to try to distract the press away from Victor and hopes she can get Arturo on board.

At Crimson Lights, Abby tells Arturo she wants to “humanize” Victor and she thinks their wedding is a good way to grab some attention.

Mia and Rey arrive in the back and see Abby and Arturo talking at a table. Rey wants to give Abby her space so he decides not to go inside.

Mia walks over to their table and gives Abby a big hug, then tells her she has a cream that will help all puffiness around her eyes, Abby and Arturo leave, telling Mia they’re going to get their engagement photo done. Mia brings up how camera-shy Arturo was when they were dating.

Sharon and Mariah arrive at Nick’s and Sharon says she’s having a hard time accepting Victor going to prison for J.T.’s death. Stirring the pot, Phyllis points out to Mariah that she’s complicit in the murder too. Sharon says that if they all agree to let Victor take the fall, whoever is targeting them could still turn them in at any time.

Sharon suggests if they all confess, then Nikki can cop a plea, as she was just protecting her daughter. “You’re out of your mind,” Phyllis says. Nick says they can’t risk it.

Abby has had clothes sent over to the Abbott estate and tells Arturo she pitched their story to Life & Style, and they want to do an interview and photo shoot. After she picks out a suit for him, she says she needs to get to the courthouse.

At the ranch, Victoria and Nick say they want to be there when the police escort arrives. Victoria and Nikki leave the living room to make coffee and Nick tells Victor he’s not going to stop until he finds out who framed him. Victor says while he’s in jail, Victoria will look after Newman, and Nick will take care of the family. He tells Nick to look out for Abby saying, “I don’t trust her fiancé.”

As Phyllis watches another news report on Victor going to trial, she looks pensive and says: “I’m not the only one who wants to see him go down.”

Michael joins the Newmans’ just before the doorbell rings. Rey, Christine, and two police officers arrive. Victor says: “It’s a hell of a day for you, isn’t it?” to Christine. She says it was a sad day because she used to look up to him once. Rey takes out handcuffs and places them on Victor. Nikki tells Victor she doesn’t want him to do this and begins yelling that she can’t let it happen. She then tells Christine there won’t be any trial because she has something to tell her.

Kristoff’s Tribute Is A Tear Jerker

The show ends with a Kristoff St. John interview. He talks about how he was a part of something that will be in a time capsule and he was one of the family members on the Y&R. There are clips of Kristoff with Katherine (Jeanne Cooper), Jack (Peter Bergman), Victor, Nikki, Abby (Eileen Davidson), Lily (Christel Khalil) and Devon (Bryton James).

“Thank you for sharing in this adventure, this mighty ship that has sailed for so long. I love you,” Kristoff says to the fans and gives the thumbs up.

Will Nikki confess to J.T.’s murder on Monday’s episode? We’ll give you updates as other news comes in. Stay tuned to the CBS soap and don’t forget to check Hollywood Hiccups often for the latest Young and the Restless spoilers, updates, and news.