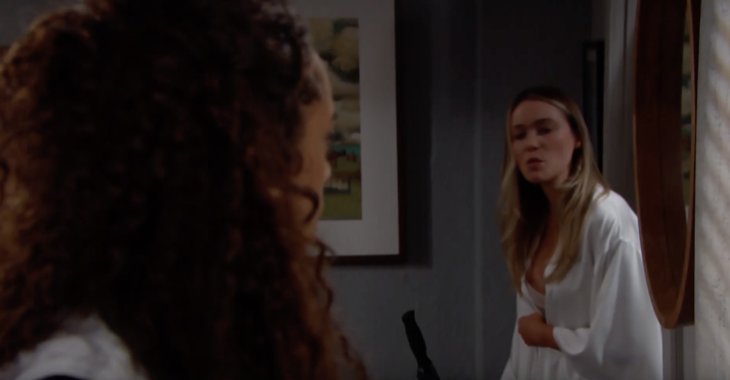 “Bold and the Beautiful” spoilers for Monday, February 11, tease that Zoe Buckingham (Kiara Barnes) will change her tactics a bit with Florence “Flo” Fulton (Katrina Bowden). Zoe’s been going after Flo hard with questions about her involvement with Reese Buckingham (Wayne Brady).

The confrontation between Zoe and Flo will definitely continue, but Zoe will soften her approach a bit and apologize to Flo for coming at her so hard. But Zoe will be clear that she is going to get to the bottom of whatever Flo and Reese are involved in, and she’ll continue to ask Flo tough questions.

Zoe simply doesn’t believe that Flo is the birth mom of Steffy Forrester’s (Jacqueline MacInnes Wood) new baby, as the adoption papers claim, and she’s sure that she’s now onto whatever her dad is mixed up in. It looks like it will be a while before Zoe puts everything together and figures out that Phoebe Forrester (Rosalind Aune and Isabella de Armes) is actually Hope Spencer (Annika Noelle) and Liam Spencer’s (Scott Clifton) little girl, but she’ll be a step closer to the truth.

And Flo will be scared stiff about the truth coming out, but it doesn’t look like she’ll spill the whole story to Zoe about the baby swap just yet. According to B&B spoilers, Flo will stick to her birth mom story for now, and will later frantically try to get in touch with Reese to let him know that everything is unravelling.

Meanwhile, on the new B&B episode on Monday, February 11, Hope will have Steffy deeply concerned. Hope has found herself unable to get little Phoebe off of her mind, and she even accompanied Liam to Steffy’s house because she wanted to see Phoebe again.

Of course, what Hope is feeling (without realizing it) is a deep maternal connection to her own daughter. But since nobody knows that Phoebe is really Beth Spencer, it’s looking like Hope is obsessing over a baby that’s not hers…and that will worry Steffy a great deal.

In fact, both Steffy and Liam were concerned when they overheard Hope on the baby monitor talking to Phoebe about how much she loves her and misses Beth. But Steffy sympathizes with what Hope’s going through, so it looks like she’ll keep her concerns to herself for the time being.