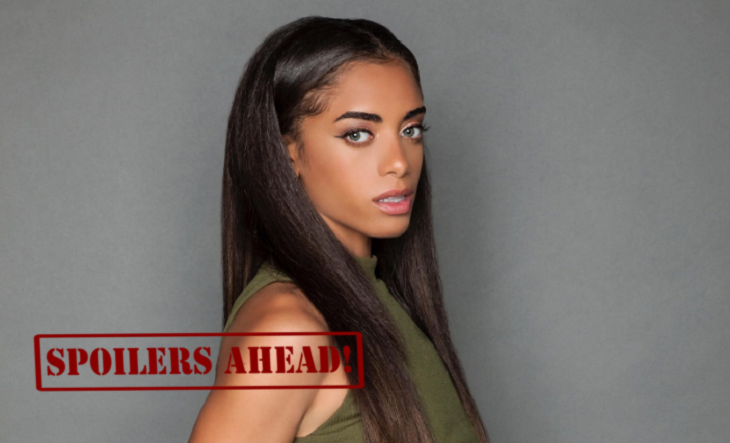 The Bold and the Beautiful (B&B) spoilers tease that Zoe Buckingham (Kiara Barnes) will uncover the truth about the baby swap during the week of February 11. She will find out that Flo (Katrina Bowden) helped her dad, Reese Buckingham (Wayne Brady) sell Hope Logan (Annika Noelle) and Liam Spencer’s (Scott Clifton) baby to Steffy Forrester(Jacqueline MacInnes Wood) so he can pay off his enormous gambling debt. While Brad Bell teased that this storyline could play out over years, it sounds like Hope and Liam may have their baby pretty soon.

The first part of her post on Facebook, what it seems like a goodbye to Wayne Brady. She thanked him for being a great TV dad and she said it’s been a dream come true to work with him. Then, she revealed that next week Zoe will discover the secret. It doesn’t say what Zoe will do when she finds out. It’s possible she will do what she has to protect her dad from getting in trouble with the police.

Executive producer Brad Bell promised to bring drama for February sweeps. He promised that the show would be action-packed and a major scoop will rock the families. Imagine the tension and turmoil of Steffy having to give up the baby she named Phoebe to Liam and Hope. She wouldn’t fight it as it is their child, but it will be heartbreaking to watch. She feels like this baby completed her family.

The Bold And The Beautiful Rumors: Wyatt And Sally’s Relationship To Be Tested By Thomas — Can They Survive It?

Are you surprised that Zoe will uncover the truth? What do you think she will do with the information? Do you think Reese will ever come back? Don’t forget to come back to Hollywood Hiccups later for more Bold and the Beautiful (B&B) spoilers, news, and casting updates!