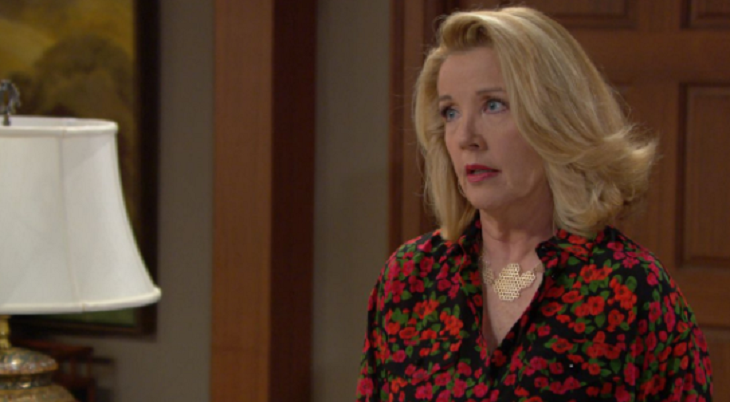 The Young and the Restless (Y&R) spoilers for Monday, February 11 indicate that a distraught Nikki (Melody Thomas Scott) will admit she is the person who killed J.T. (Thad Luckinbill).

At Newman Ranch, Nikki tells Christine (Lauralee Bell) and Rey (Jordi Vilasuso) they’re arresting the wrong person. Victor (Eric Braeden) tells her not to do it. Victoria (Amelia Heinle) and Nick (Joshua Morrow) also try to stop her from speaking but Nikki can’t help herself.

“You’re arresting the wrong person,” Nikki yells. “My husband did not kill J.T., I did.”
Michael (Christian Le Blanc) tells Nikki not to say another word but Nikki says the situation has gone on for too long.

Christine and Rey speak quietly in the hallway, and Christine says she’s worried they won’t be able to convict Victor. They walk back into the main room and Christine says they’re going to postpone the trial. Nikki is arrested and taken away for questioning.

Kyle (Michael Mealor) comes in after a swim at the Abbott estate and Jack (Peter Bergman) asks him if he was outside swimming with polar bears. Kyle tells him he and Lola (Sasha Calle) are probably over.

Jack says that couples fight and asks his son if he’s talked to Lola. Kyle says she’s too busy and her career was part of the reason they argued. Jack says there’s no better time than Valentine’s week to prove how much she means to him and that he has an idea.

Jack gives Kyle the key to the Abbott cabin, but Kyle says the last time he invited Lola there, she turned him down. Kyle tells Jack Lola’s not interested in sex, that she’s waiting. Jack suggests Kyle cook for Lola at the cabin and says he’ll have a horse-drawn sleigh waiting for them there. He texts Lola and asks her if they can meet.

Fen (Zach Tinker) arrives at Devon’s (Bryton James) house and asks Ana (Loren Lott) for another chance. She says it’s not up to her and Fen asks her not to give up on him. He tries to make excuses for his behavior, but Ana lets him have it. Fen admits the success went to his head but says he can’t lose this opportunity. He knows he’ll have to work hard but asks her if she will talk to Devon.

Summer (Hunter King) arrives at Crimson Lights and finds a gloomy Fen sitting by himself. He tells her he thinks he’s going to be fired. Fen says he ruined his big shot on a girl that’s not even interested in him. Summer admits she was using him to make Kyle jealous. Fen says he did the same thing with her to make Lola jealous. Devon and Ana come in and Summer asks Devon if she can speak with him.

Summer tells Devon it was her fault Fen was a no-show at the showcase because he was helping her out. Devon says people must live with the choices they make. Ana pulls Devon aside and Fen thanks Summer.
Devon tells Fen that Ana just went to bat for him and they’re giving him one more chance. He tells Fen they are sending him out on the road to open for some of their established acts.

Fen wants to take Summer out to celebrate but she sees Kyle walk in and declines. Lola arrives and sees Kyle and Summer sitting together. Kyle tells Lola he doesn’t like how things are between them and gives her Valentine’s invitation to the Abbott cabin.

Lola says she can’t take a vacation with all the work she has to do in the new restaurant. They argue and Lola believes they should go their separate ways. She hands him back the invitation which he throws on a table. After listening to Kola’s conversation, Summer pics up the invitation after he leaves.

At the police station, Rey asks Nikki why she kept quiet all those months. Nikki tells Rey about “girl’s night” at Victoria’s but changes many details. Nikki says she went upstairs alone to check on her daughter and she heard yelling and saw J.T. choking Victoria. She grabbed the fireplace poker and threatened him with it, and he left. She says she left Victoria’s, tracked down J.T. at Chancellor Park, he lunged at her and she hit him in the head with the poker.

Rey asks her why she didn’t call the police. She says she didn’t think anyone would believe her story. Nikki ignores Michael every time he tries to help her. Nick and Victoria arrive at the station and find out they can’t see Nikki until the next day. Michael asks them if Nikki killed J.T.

Rey questions Victoria about J.T. and “girl’s night” and tries to trip her up. Just as Michael pulls Victoria out of the room, Rey asks if she has a fireplace in her bedroom.

Later, Rey tells Nikki that until they sort things out, she’ll be staying in police custody. Rey says he believes she was involved in J.T.’s death, but she didn’t do it alone and he’s going to prove it.

The Young And The Restless Spoilers: Mia Calls Out Arturo’s Name During A Passionate Moment With Rey

Don’t miss the Valentine’s Day drama coming up on Y&R this week. We’ll give you updates as other news comes in. Stay tuned to the CBS soap and don’t forget to check Hollywood Hiccups often for the latest Young and the Restless spoilers, updates, and news.