Days Of Our Lives Spoilers: Ben Rescues Ciara From Burning Cabin – But Jordan Sneaks Into Her Hospital Room 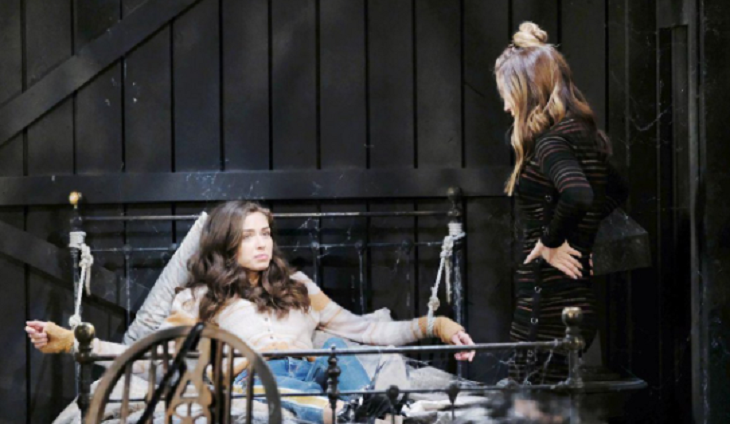 Days of Our Lives (DOOL) spoilers tease that Ciara Brady (Victoria Konefal) will be in serious jeopardy in the cabin with Jordan Ridgeway (Chrishell Hartley). Jordan’s really lost it and she’s convinced herself that her brother Ben Weston (Robert Scott Wilson) is dangerous and must go back to Bayview.

While Ciara’s drugged and unconscious in the cabin, Jordan will frame Ben for both Ciara’s and Charlotte DiMera’s kidnapping, which will result in Ben being arrested for the crimes. With Ben out of the picture, Jordan will assume that Charlotte will be safe and she’ll plan to take her to Abigail Deveraux (Kate Mansi) and Chad DiMera (Billy Flynn).

But Jordan will apparently decide that Ciara is a lost cause, given that she clearly still believes in Ben. Jordan will do the unthinkable and she will set the cabin on fire with Ciara still inside! Ciara will be helpless to save herself, but luckily for her, Ben will manage to escape from police custody.

DAYS Spoilers– Ben Will Team Up With Chad To Save Ciara

Ben will be determined to find Ciara and he’ll persuade a reluctant Chad to help him with his mission. The two will manage to find Ciara, and as they approach the cabin, they’ll notice that the cabin’s on fire and rush to the scene. Ben will thankfully manage to get Ciara untied and outside to safety.

But that doesn’t mean that Ciara’s going to be home free from danger going forward. She’ll be carted off to the hospital to be checked out, but it seems that Jordan will get word that Ciara was rescued from the fire, and she won’t be happy about.

In Jordan’s warped mind, she’ll figure that Ciara will be better off dead (yikes) than with Ben, so she’ll sneak into Ciara’s hospital room wielding a syringe. It looks like Jordan will try to poison Ciara, so Ciara had better watch out!

Jordan will thankfully not follow through on her plan, and all indications are that Ciara will end up being ok, so it looks like Jordan will get caught in her attempt to drug Ciara. Who do you think will catch her?

Days Of Our Lives Spoilers: Major Shocker To Rock Salem, Who Is The Monster?