General Hospital Spoilers: Ava To The Rescue – Shows Up In The Nick Of Time To Save Griffin 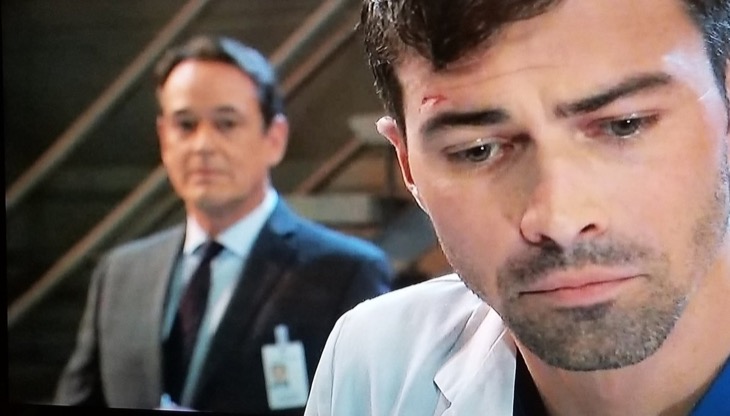 General Hospital spoilers tease that Ava Jerome (Maura West) will show up just in the nick of time to prevent “Kevin Collins” (Jon Lindstrom) from injecting Dr. Griffin Munro (Matt Cohen) with something and staging his murder as a suicide! At the end of Friday, February 8th’s episode, Ryan Chamberlain could be seen coming up behind Griffin with a large syringe filled with a creamy yellowish substance, after luring him out on a terrace on the General Hospital roof overlooking a memorial area where he said a memorial brick with Kiki Jerome’s (Hayley Erin) name on it would be placed.

Ryan completely took things the wrong way and thought Griffin’s hug of Ava, which was merely to comfort her, was sexual or romantic and became insanely jealous (is anything he does or feels NOT insane)? He even had grabbed Ava’s arm and told her never to walk away from him, which did not go over well with her, and which he wound up apologizing for!

It’s plain to see Ryan’s obsession with Ava has become full-blown and not just a crush or even love. The parts of Ava he is in love with are those which mirror himself; which is the hallmark of a narcissistic sociopath. You could say Ryan’s in love with himself, and taking it out on Ava! With this kind of personality disorder, possessiveness is disguised as protectiveness, and control is disguised as caring.

Adoration could easily become abuse! Rumors abound that Matt Cohen may indeed be leaving General Hospital to return to his former series work on the CW network’s show “Supernatural” but it has not been confirmed; after all, he also recurred as Ryan Garrett on “Criminal Minds: Beyond Borders” and Matt Cochran on the “Kings of Con” during the same time period he’s been on GH as Griffin. So it appears that at least for now, Griffin may not leave GH at the murderous hands of Ryan Chamberlain.

Will Griffin ultimately become Ryan’s fourth successful murder victim, or has he escaped that fate thanks to Ava’s interruption? Stay tuned to General Hospital and keep checking General Hospital spoilers frequently for the latest developments!