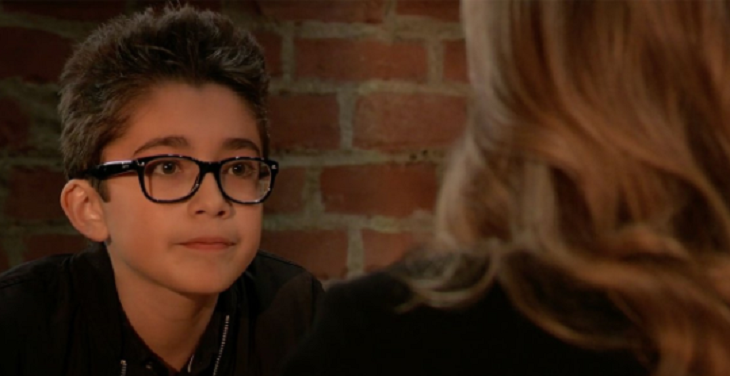 General Hospital (GH) comings and goings indicate that a familiar face will be popping back to Port Charles in the coming weeks. That’s because actress Sofia Mattson will soon be making her way to the canvas to reprise her role as Sasha. There’s also another General Hospital veteran actor that will be back. Here’s what you need to know.

The last time we saw Sasha, she left town in fear for her own life after she found out about Kiki Jerome’s  (Hayley Erin) murder.  Kiki’s murder shock Sasha to her core.  It will be interesting to see if she unveils Valentin’s  (James Patrick Stuart) little secret while she is back in town, too. It turns out that Sasha isn’t the sweet woman everyone thinks she is. As a matter of fact, she’s quite a trouble maker. Valentin had paid her to lie about her being Nina’s (Michaelle Stafford) daughter. The guilt over what happened – along with Kiki Jerome’s murder – made her leave Port Charles. Now that she’s back, it looks like she has a few loose strings to take care of.

Sasha's back in Port Charles and Nina couldn't be happier! But how much longer is she willing enable Valentin's deception? @SofiaMattsson1 #GH is brand-new and STARTS NOW on ABC! @TheRealStafford #GH55 pic.twitter.com/QbiHWQaNMz

GH Spoilers— Spencer Is Back Too!!

If that weren’t enough, another General Hospital fan favorite will be returning very soon, too. Actor Nicholas Bechtel will be reprising his role as Spencer Cassadine. The pint-sized actor shared a behind-the-scenes photo of him and his fellow co-star Scarlett Fernandez (Emma) going over some lines before filming a scene. There’s no doubt that fans are looking forward to seeing him share some scenes with his beloved grandmother, Laura Spencer. Many fans are hoping that Spencer won’t be getting mixed into all of the drama that Ryan Chamberlain has been creating lately. Laura will want to keep an eye on her sweet, spunky grandson.

General Hospital airs weekdays on the ABC network. Check your local listings for times. In the meantime, let us know your thoughts in our comments section below. And as always, come back to Hollywood Hiccups for all the latest news, updates and spoilers on General Hospital and all of your favorite daytime television shows right here!