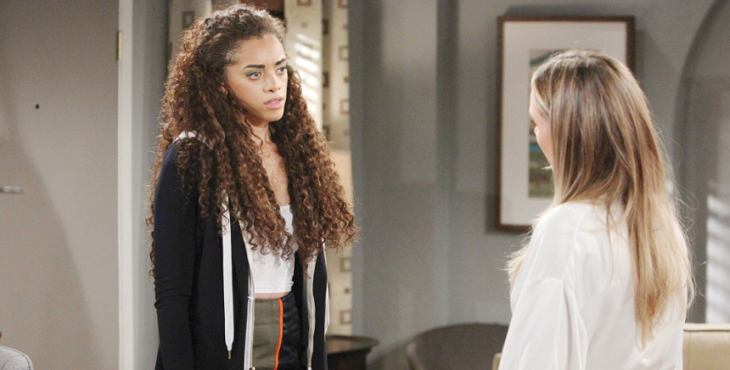 The Bold and the Beautiful (B&B) spoilers for Tuesday, February 12, tease that all of Zoe Buckingham’s (Kiara Barnes) questions for Florence “Flo” Fulton (Katrina Bowden) will get some things moving. Flo will be really unnerved after her latest run-in with Zoe, during which Zoe found the adoption papers and questioned her father’s role in Steffy Forrester’s (Jacqueline MacInnes Wood) adoption.

Flo will be feeling nervous since she spilled some crucial details to Zoe…details that Reese wanted kept secret. After Zoe threatened to go to Steffy herself with her questions, Flo admitted to Zoe that Reese Buckingham (Wayne Brady) is the one who secretly brokered the adoption and that even Steffy doesn’t know that he was the broker.

Flo will be feeling terrible about saying too much to Zoe, plus, she’ll be certain that Zoe’s not going to stop digging until she finds out the whole truth about the adoption. So, she’ll decide that it’s time to contact Reese and let him know what’s going on.

The Bold and the Beautiful spoilers suggest that Flo will desperately try to get in touch with Reese, but she may not have much luck. After all, Reese left town to put distance between himself and the adoption, and he may not want to be found. Still, if Flo is able to leave him a message saying that Zoe is zeroing in on the truth, he’ll probably come out of the woodwork.

Today on #BoldandBeautiful, Hope gets close to Phoebe and shuts Steffy down at the suggestion of having another baby. pic.twitter.com/QmckJ3Jqsj

To Steffy, Hope seems overly attached to Phoebe and she’ll wonder whether it is healthy for Hope to be so drawn so strongly to someone else’s child while she’s still grieving the loss of her own child.

But then again, if spending time with Phoebe does Hope some good, then Steffy doesn’t want to deprive her of that. Steffy will be feeling ambivalent about the whole situation, but she’ll decide to voice her concern to Liam Spencer (Scott Clifton) and get his perspective.

Liam will understand Steffy’s concern, but he’ll defend Hope’s behavior. He may argue that Hope tends to be pretty self-aware and she knows what she needs, so if part of her healing process is being around Phoebe, then they should let her do it. And if Hope thinks that being with Phoebe helps her deal with Beth Spencer’s death, then so be it.