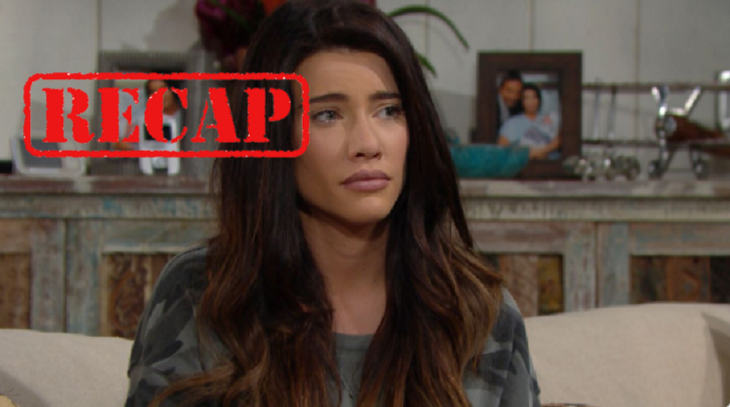 The Bold and the Beautiful (B&B) recap for Tuesday, February 12 reveals that Steffy (Jacqueline MacInnes Wood) is feeling increasingly concerned over Hope (Annika Noelle) and how she is smothering Baby Phoebe. She might be smothering her with love, but Steffy feels uncomfortable with her being so attached to the child she adopted.

Liam (Scott Clifton), meanwhile, is defending his wife. He tells Steffy at her Cliff House that Hope is just working through her issues with her depression and if spending time with Phoebe helps her get back on track, then so be it. While helping her with laundry, Liam asks Steffy is there is anything else he can do.

He wants to be a father figure to both Kelly and Phoebe. Steffy appreciates the offer but tells him that his priority should be Hope right now. She also tells Liam that she thinks Hope’s current coping mechanism might not be the right solution.

Flo Give Reese A Warning

Back at Dr. Reese Buckingham’s apartment, Zoe (Kiara Barnes) continues to grill Florence (Katrina Bowden) about the scam adoption. Flo is trying her best to keep the details at a minimum, but Zoe keeps pressing her for more information.

She tells Zoe that her father wanted to keep his name off the adoption papers because he didn’t want to jeopardize Zoe’s position at Forrester Creations, seeing how Steffy is her boss. After a very tense and awkward moment, Zoe leaves the apartment. Outside, she’s full of anger while Florence sends a text message to Reese in London with a warning.

Elsewhere, Brooke (Katherine Kelly Lang) is getting ready for Valentine’s Day in hopes that Ridge (Thorsten Kaye) will come looking for her at Hope and Liam’s cabin. Even though it’s a complex situation, both Brooke and Ridge agree they want to do what’s best for Hope. The grieving mother then appears and proceeds to tell both Brooke and Ridge how she feels whenever she looks into Phoebe’s eyes.

Today on #BoldandBeautiful, Zoe reveals to Xander that she found out new information regarding Reese and Flo. pic.twitter.com/7P1Qd5282D

In the Forrester Creations’ studio, Zoe might have a lot on her mind, but if there’s one person that she hasn’t forgotten about, it’s Xander (Alexander Avant). Zoe brings him up to speed about everything that she has learned about Steffy’s adoption and how her father might be involved. Xander looks just as confused as Zoe.

She then tells him that the baby isn’t her father’s, but also can’t help but wonder who it might have belonged to as she’s pretty sure Florence didn’t give birth. Xander is worried now and insists that Zoe doesn’t sneak off to her father’s apartment anymore, as this might cause her some problems.

The Bold and the Beautiful airs weekdays on the CBS network. Check your local listings for times. In the meantime, drop us a line with your thoughts in our comments section below. And as always, come back to Hollywood Hiccups for all the latest news, updates and recaps on The Bold and the Beautiful along with all of your favorite daytime and primetime television shows right here.