The Young And The Restless Spoilers Wednesday, February 13: Rey Professes His Love To Sharon – Lola Sees Kyle And Summer Kissing 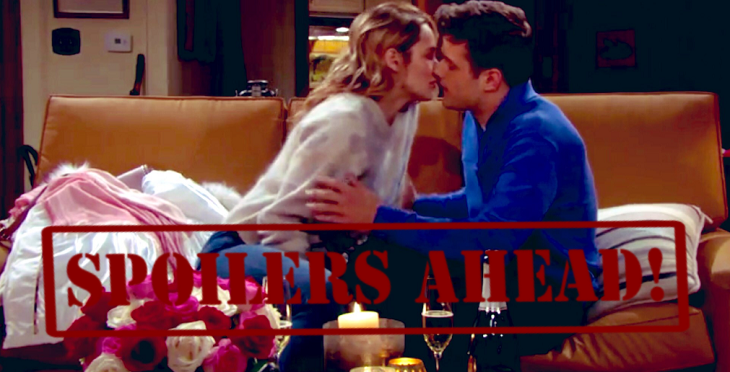 The Young and the Restless (Y&R) spoilers for Wednesday, February 13 tease that shortly after his wife called out his brother’s name in the heat of the moment, Rey (Jordi Vilasuso) will head to Sharon’s (Sharon Case) and tell her he loves her.

Cane’s (Daniel Goddard) twins ask him why he’s not visiting their mother Lily (Christel Khalil) at the prison on Valentine’s Day. He tells them he’s got a lot of work to do. Mattie (Lexie Stevenson) says she’ll phone their grandfather to find out what’s going on, but Cane tells her it’s her mother’s choice that he not be there.

Charlie (Noah Alexander Gerry) mentions a video they had been working on. The video celebrates their parent’s love and includes King Cane and Queen Lily. They ask him to narrate the part where the queen is locked away from her true love.

At the Abbott estate, Jack (Peter Bergman) chastises Lola (Sasha Calle) for breaking Kyle’s (Michael Mealor) heart. She admits she had only thought of their relationship from her point of view and she wants another chance with him. Jack gives Lola the address to the cabin. She leaves to be with Kyle.

At Dark Horse, Arturo (Jason Canela) brings Abby (Melissa Ordway) an interesting gift, scuba gear. He tells her it’s for their wedding. She looks at him, perplexed. “You want to get married underwater?” Abby asks him, then laughs and says no way. Lola arrives and asks if she can borrow Arturo’s truck to get to the cabin as her vehicle had broken down. Arturo tells her it’s not a good idea, but Abby convinces him to lend her the truck.

Meanwhile, at the cabin, Summer (Hunter King) takes off her jacket and suggests they celebrate Valentine’s Day as friends and picks up the bottle of champagne in the ice bucket.
“Love is overrated but champagne is swell,” she says.

Abby and Arturo are making a splash courtesy of @LifeandStyle! #YR pic.twitter.com/vCvzDvxmiR

Kyle pours them each a glass of bubbly and they make a toast to moving on. Summer kisses him and he kisses her back but then stops and says he loves Lola and it feels wrong. Summer disagrees and they kiss again. It’s at this moment that Lola is at the door and sees them kissing through the glass pane.

Rey Professes His Love To Sharon

Mia (Noemi Gonzalez) is pacing at home, leaving Rey messages, telling him she called out his brother’s name by mistake. She looks at the Life & Style magazine again with Arturo and Abby on the cover and throws it to the floor angrily.

Sharon is at home, working on her taxes. Her doorbell rings and she opens the door to find Rey standing there. She asks him why he’s there. He says he thought renewing his wedding vows would be a fresh start for his whole family, but his marriage to Mia was a lie.

“I tried with Mia, but you can’t make it work when you love someone else and I do, I love you, Sharon,” Rey says.

Sharon tells him he needs to work it out with his wife, but Rey says he’s tired of being second best. She asks him if it’s about Arturo. He says he fooled himself for years with Mia and would have continued to if he hadn’t met her.

He tells Sharon he loves her again and she returns the sentiment. He leans in to kiss her, but she stops him and says she’ll make some tea. As he moves papers off the couch, Rey picks up a phone bill from April.

Trouble Is Brewing For Sharon And Mia

Rey shows Sharon the old phone bill and asks her why she called 911 on the night J.T. (Thad Luckinbill) died.

At Crimson Lights, Mia runs into Arturo. She tells him what happened with Rey and warns him that his brother could come after him.

The Young and the Restless Poll: What Will Adam Newman’s Comeback Story Be?

Thursday’s Y&R will feature an epic Valentine’s Day brawl between Mia and Abby. We’ll give you updates as other news comes in. Stay tuned to the CBS soap and don’t forget to check Hollywood Hiccups often for the latest Young and the Restless spoilers, updates, and news.