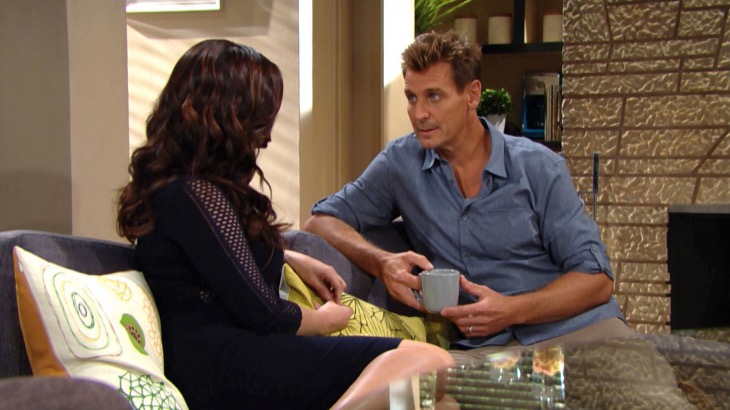 The Bold and the Beautiful recap for Wednesday, February 13th finds that Thorne is done feeling like a third wheel in his own marriage. Wyatt Spencer (Darin Brooks) and Sally Spectra (Courtney Hope) try to get Hope Logan’s (Annika Noelle) mind off of things while Zoe Buckingham (Kiara Barnes) issues a new threat to Flo.

It all begins at Forrester Creations, as Hope (Annika Noelle) is trying to get back into the swing of things at work. Everyone feels on edge, as they are trying to tiptoe around a very fragile Hope as she eases back into things. Wyatt (Darrin Brooks) and Sally (Courtney Hope) offer their support by trying to get her mind off of things by presenting her with new schedules. Unfortunately, Hope can’t stop thinking about Baby Beth. She tells them that if she were awake, Baby Beth would have had a better chance of staying alive.

In the studio, Zoe (Kiara Barnes) and Xander Avant (Adain Bradley) ponder over their next move. Zoe is determined to find out why her father Reese (Wayne Brad) was involved in Steffy (Jacqueline MacInnes Wood) and her sketchy adoption. Zoe tells Xander that she is going back to her father’s apartment to look for more clues. He’s worried and tells her that she might be jeopardizing her safety.

Over at Katie Logan’s (Heather Tom) house, she’s getting ready for Valentine’s Day. She has a romantic surprise in store for Thorne Forrester (Ingo Rademacher) and asks if he can watch Will for a little bit so she can run some errands. Instead, Thorne decides to have a serious heart to heart with her on the couch. He explains how he’s made so many changes and sacrifices in the last year for both her and Will.

Thorne, looking very emotional, tells her that he thinks their marriage was a bad idea. This leaves Katie nearly speechless. Thorne further explains that he thinks he is just getting in the way of her and Bill (Don Diamont) and their family. He then presents her with annulment papers, leaving Katie absolutely shocked. This is not what she was hoping to see on Valentine’s Day.

Back at Reese Buckingham’s apartment, Florence (Katrina Bowden) sends text messages to the doctor in London, warning him that Zoe is on their trail. Reese then gives her a call, with Flo not knowing that Zoe is eavesdropping on her. She hears the entire conversation. Flo tells Reese that he needs to do something, otherwise Zoe is going to let the cat out of the bag and someone is going to end up behind bars. Flo is then stunned when she opens the door with Zoe standing right there. The model threatens to go to the police as Flo finally confesses that it was Reese who took Hope’s baby and put it up for adoption.

The Bold and the Beautiful airs weekdays on the CBS network. Check your local listings for times. In the meantime, let us know what you think by leaving us a line with your thoughts in our comments section below. Also, come back to Hollywood Hiccups for the latest spoilers right here!