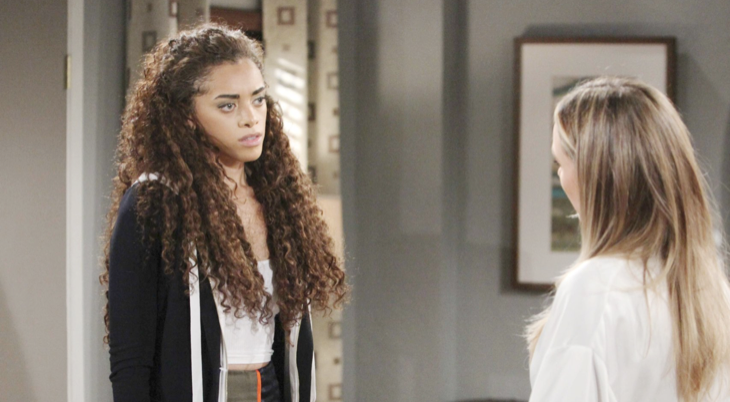 “Bold and the Beautiful” spoilers for Thursday, February 14, tease that Valentine’s Day will provide plenty of drama. For starters, Zoe Buckingham (Kiara Barnes) will get a huge shock as Florence “Flo” Fulton (Katrina Bowden) provides details about what Reese Buckingham (Wayne Brady) did with respect to Steffy Forrester’s (Jacqueline MacInnes Wood) adoption.

Flo just told Zoe that Reese “switched the babies,” but there are plenty more details to be hashed through. Zoe will be stunned as Flo recounts the story of how Reese delivered a healthy baby to a woman named “Hope,” but then stole the baby and switched it out with a deceased infant.

Of course, it won’t take long for Zoe to put the pieces together and figure out that the “Hope” in the story is actually Hope Spencer (Annika Noelle), that the baby who was stolen was Beth Spencer, and that the baby now known as Phoebe Forrester (Isabella de Armes and Redford Prindiville) is actually Beth Spencer.

Zoe will be livid with her father after hearing all these details, and she’ll want to hear from him directly about the story that Flo has just told. But Zoe knows that her dad was acting strangely before his departure for a reason, and she’ll have the sinking feeling that Flo is telling the truth. Nevertheless, she’ll pick up the phone and call her dad immediately.

Next, on the new B&B episode on Thursday, February 14, Hope will decide that it’s time to address one of her biggest fears. She’s been feeling for a while now that she’s somehow responsible for Beth’s death, and that if she had just stayed awake during the delivery, then Beth would have survived.

Since she couldn’t get any answers from Reese about the matter, Hope will take matters into her own hands and decide to search her own memory for the night of Beth’s delivery. It looks like she’ll do a little self-hypnosis to see if she can remember anything about what went down that terrible evening.

Liam Spencer (Scott Clifton) will offer support as Hope closes her eyes and attempts to remember everything that happened the night of Beth’s delivery. But will the exercise prove fruitful?

Finally, on Thursday, February 14, two couples will have very different Valentine’s Day experiences. On the good side of the spectrum, Wyatt Spencer (Darin Brooks) and Sally Spectra (Courtney Hope) will celebrate their love in the bedroom. These two are in a great place in their relationship and are very much in love. They’ll enjoy the holiday and each other.

Thorne blindsides Katie, who is preparing for Valentine's Day, with an admission about their marriage. WATCH FULL EPISODE: https://t.co/0Np0BJb8P4 #BoldandBeautiful pic.twitter.com/JbBXTAgAAO

But across town, another couple will be calling it quits. Thorne Forrester (Ingo Rademacher) has just presented Katie Forrester (Heather Tom) with annulment papers and informed her that he thinks their marriage was a mistake. Katie was taken aback by the announcement, but it looks like she’ll find her voice on Thursday’s episode.

Katie will protest the idea of a split, arguing that they’ve just begun their life together and that it isn’t fair to call it quits so soon. She’ll probably also add that, although they got married quickly and for the sake of her custody dispute with Bill Spencer (Don Diamont), she truly loves Thorne and wants to make things work.

But it looks like Katie’s protests won’t matter much. Thorne has made up his mind that their marriage was a mistake, and he’s not going to reconsider the move. It looks like Katie will have to accept the reality of the situation and move forward with the annulment.