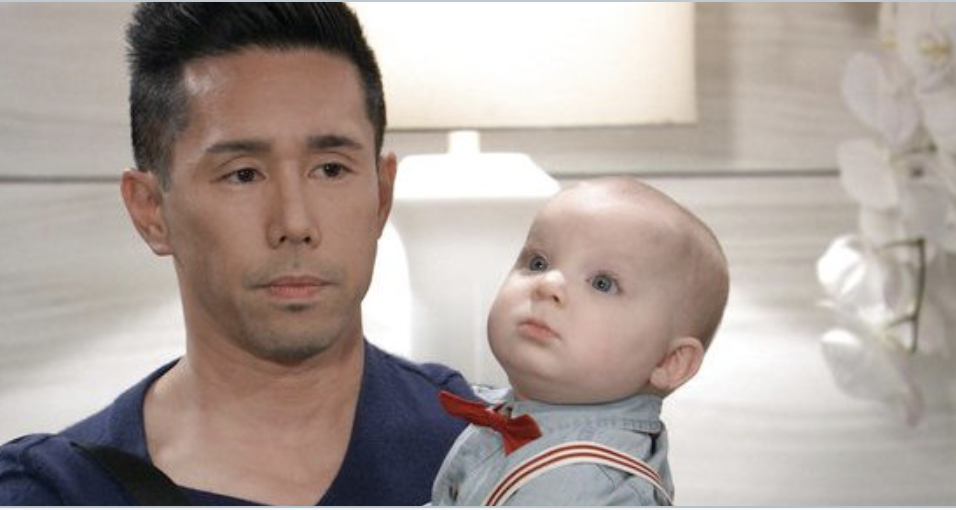 What a day in Port Charles! Welcome to your Wednesday, February 13th General Hospital recap! We begin our day in Stockholm, Sweden where Finn (Michael Easton) and Robert (Tristan Rogers) are waiting in the clinic to find Dr. Cabot. Finn calls Anna (Finola Hughes) to say happy Valentine’s day and then she suddenly appears from around the corner.

Finn is excited to see Anna who has surprised him in Sweden. Anna brings up Obrecht (Kathleen Gati) and her relationship with Maxie (Kristen Storms) and Peter (Wes Ramsey.) Robert jokes that Obrecht and Anna better not become BFFs. Robert and Finn are trying to get Anna to leave and wait for them at the hotel bar. A nurse explains that Dr. Cabot is a patient at the hospital, he does not work there. The nurse rolls Dr Cabot into the room in a wheelchair and he says he’s blind. Dr. Cabot says his blindness came on suddenly and discusses a cure for the condition he created. Robert says if you help us, we will help you. They ask the Dr if he can give them more info on the identical twin experiments. He hears Anna talk and says “I recognize that voice.” 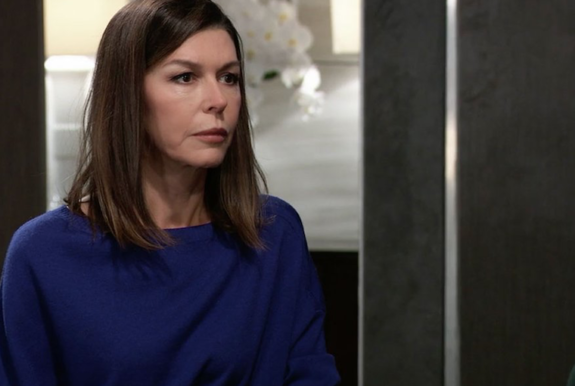 Willow (Katelyn Macmullen) arrives at the Metro Court looking for Chase (Josh Swickard). All of a sudden Willow runs right into Brad (Perry Shen) who is holding what she thinks is her baby. Willow asks about Wiley and Brad gets a bit nervous and agitated. Willow tells Brad that she’s Wiley’s mother. Willow and Brad exchange words about how long he’s “known.” She says she wants a relationship with the baby. Michael shows up and wants a minute with Wiley. Michael tells Brad that he heard from Nelle which surprises Brad.

Earlier, Michael (Chad Duell) is at the hospital and runs into Chase (Josh Swickard). They discuss Franco (Roger Howarth) being held for the murders. Chase laughs when he sees Michael has a Valentine. Surprise it’s from Nelle Benson (Chloe Lanier). Finn jokes that he should set the Valentines card on fire (LOL). Michael realizes that Nelle can’t bother him anymore and she can’t take the memory of baby Jonah away from him. Michael seems sarcastically jealous of Chase and Willow’s friendship. At the Metro Court, Chase and Willow discuss the baby she gave up and how it does not bother him.

Kristina (Lexi Ainsworth) strolls into the Metro Court and sits down with Alexis (Nancy Lee Grahn). They discuss Dawn of Day and that Sonny (Maurice Bernard) has no reason to worry about Shiloh (Coby Ryan Mclaughlin). Alexis and Kristina continue to discuss Dawn of Day and Kristina invites her to join the Valentines event. Sam shows up at the metro court to inform them that her Jason is finished and she going to the Valentines event as well. The ladies do not seem to believe Sam’s lie (she’s a terrible liar btw). Sam says she needs to discover herself and seek enlightenment. Alexis does not believe her and Kristina almost seems jealous Sam is going to Valentine’s event. Alexis warns Sam to be careful whatever it is she is up to.

Sam (Kelly Monaco) and Jason (Steve Burton) discuss her fake relationship with Shiloh and how she needs to keep tricking everyone. Suddenly Shiloh knocks on the door. Shiloh leaves Jason a voicemail message about his trip to Beecher’s Corner as Jason and Sam hideout in the apartment. Sam kisses Jason goodbye asks him to wish her luck. Jason shows up at Shiloh’s to talk and Shiloh asks if he found what he was looking for. Shiloh tells Jason he is proud of Sam for looking for her “light.” Shiloh says Jason’s path is a dead end and Jason says he will take his chances……….The show fades out on the Day of Dawn logo

Joes Two Cents :
I think this cult Dawn of Day story is so poorly done – I hope it ends soon
A day without Ava and Ryan? They are the OGs of Port Charles these days
A surprise apparently is in store for a couple – a new baby! But who…
It’s a good day with no sulking from Kim and “Charlie” – though I do love Tamara Braun
Is GH really potentially pushing Kristina away from being a lesbian?
I’m loving the identical twin experiment story, soapy goodness