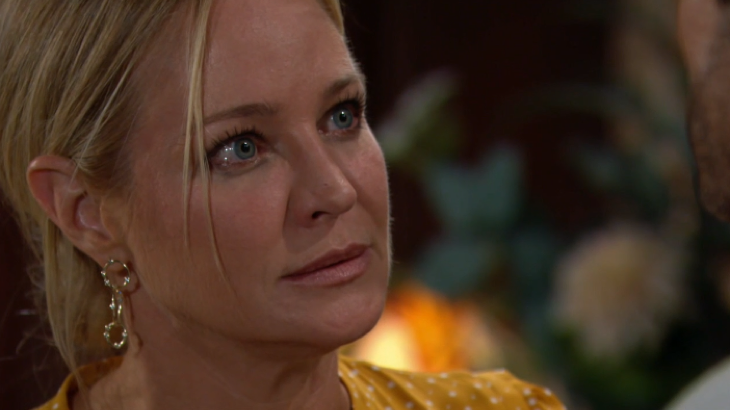 “Young and the Restless” (Y&R) spoilers for Thursday, February 14 show that Sharon (Sharon Case) will admit to Rey (Jordi Vilasuso) that she was involved in covering up J.T.’s murder.

At Sharon’s cottage, Rey asks her again why she called 911 on April 13. Sharon says it must have been an accident. She tries to deflect and says they need to continue their conversation about their feelings for each other.

Rey keeps pressing and asks if she had put her phone down at some point that evening and maybe someone else had made the call. Sharon tells him she can’t remember.

“Nikki has some holes in her story,” he says, holding up the phone bill. “But she’s not the only one,” Sharon asks him if he told her he loved her to trick her into revealing more information about the case.

Young And The Restless Spoilers: Valentine’s Day Shocker – Rey Tells Sharon He Loves Her, Will He Dump Mia? #YR #YoungandRestlesshttps://t.co/dWVLH2kB7H

“This case and what I feel for you are both real and neither one is going to go away if we both ignore it,” Rey says.

He asks her to tell him about “girl’s night” one more time and she does. Rey trips her up and accuses her of knowing J.T. was there that night. He keeps pressing and says he finally realizes that Nikki never left the house to follow J.T. at all. “It was self-defense, we had no choice,” Sharon admits.

“I saw you with her, all over each other,” Lola says. “I was right all along, sex is the only thing that matters to you.”

She says she had planned to apologize to him until she saw him and Summer together. Lola says she’s glad she never had sex with him. Kyle asks Lola if can explain himself.

As he’s trying to tell Lola what happened, Summer pulls the invitation to the cabin out of her purse and tells her Kyle gave it to her. In tears, Lola says she doesn’t need all the drama he brings to her life. Kyle tells her a relationship shouldn’t be this hard. Lola leaves and says this time she’s gone for good.

Kyle yells at Summer and tells her she’s delusional. She tells him he wants her and that even Lola sees it and he’s the only one who can’t admit it. Kyle tells Summer Lola had never tried to hurt him but that’s all that she ever does and storms out of the cabin.

The Young and the Restless Spoilers: Nikki Written Back To Strength – J.T. Storyline Can Be Saved

Meanwhile, Mariah (Camryn Grimes) and Tessa (Cait Fairbanks) are at the Athletic Club, ready to celebrate Valentine’s Day. They discuss Nikki’s confession and the complications it could involve for Sharon.

Mia (Noemi Gonzalez) calls Rey and says she’s heading to the club as she had planned. She asks him to join her there.

Jack (Peter Bergman) and Kerry (Alice Hunter) arrive at the club and say hi to Mia, who is sitting by herself. Jack tells her Abby (Melissa Ordway) and Arturo (Jason Canela) are on the way if she’d like to join them at their table, while she waits for Rey. Mia declines and orders another drink.

Jack and Kerry share a dance and he gives her a diamond bracelet, saying he hopes every time she wears it, she will think of him.

Push comes to shove when a rivalry heats up in Genoa City this Valentine's Day. Check out all of the @CBSDaytime #Valentines specials here: https://t.co/t6fe4WSYJY pic.twitter.com/5pwqVf4XM2

Abby and Arturo get there and see Mia. Arturo asks her if she wants to go somewhere else and Abby says no way. He tells Abby that Rey and Mia had a fight, over him. Abby confronts Mia, pointing a finger at her. “You and I are going to have a little chat,” she says.

Don’t miss Friday’s action-packed episode of Y&R. We’ll give you updates as other news comes in. Stay tuned to the CBS soap and don’t forget to check Hollywood Hiccups often for the latest Young and the Restless spoilers, updates, and news.