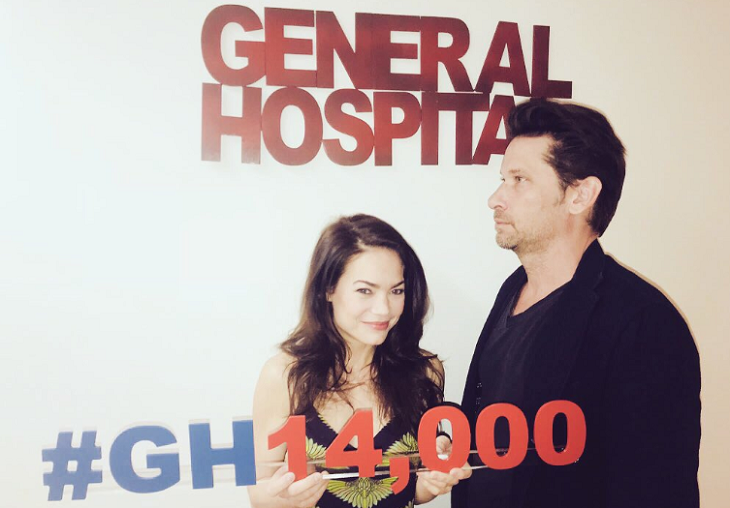 General Hospital (GH) spoilers tease that Franco Baldwin (Roger Howarth) and Elizabeth Webber (Rebecca Herbst) may have a more pleasant surprise coming their way soon. Franco’s arrest in the serial killer case was a shock, although to Franco it wasn’t a surprise! However, in Tuesday, February 5th’s episode, while at the ice skating rink, little Aiden Webber (Jason David) may have been giving us a clue when after checking out baby Wiley (Eric and Theodore) he said he would love to have a baby brother or sister.

GH spoilers say that one Port Charles couple will have a blessed event to announce, although the spoilers don’t say exactly who the couple is. Even if it doesn’t turn out to be Franco and Liz in the current spoilers, it doesn’t mean it may not be a hint for the future.

Another hint of a future Friz baby might have been articulated in Franco’s conversation with Ava Jerome (Maura West) at Kiki Jerome’s (Hayley Erin) grave on Monday, February 4th’s episode. He thanked Ava for not letting him raise Kiki; he admitted he was not a safe person for a child to be around back then. He obviously feels differently now, based on how he feels about and treats Liz’s boys as his own.

Franco has been able to communicate with all three boys, especially the younger ones, in ways no one else has, and apparently, General Hospital thinks he’s safe enough around children and people, in general, to teach an art therapy class, even though he has no formal medical or psychological training.

Is Franco Ready To Be A Dad?

Franco would be a wonderful father to a little “Bobby” or “Elizabeth.”   Several years ago when he was with Nina Reeves (Michelle Stafford) on the run with little Avery Corinthos (Ava and Grace Scarola) he didn’t want children of his own. Even though he was against having a child of his own back then, he was still quite good with caring for little Avery.

His redemption would be truly complete with a child of his own! Stay tuned to GH and keep checking General Hospital spoilers frequently to see the latest developments as always, and potential Port Charles baby announcements!