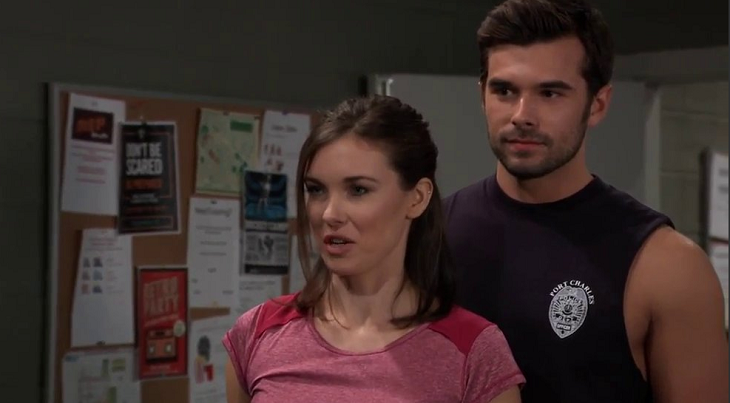 General Hospital (GH) spoilers for Monday, February 18, reveal the citizens of Port Charles continue to struggle with the serial killings as one deals with the fall out of their attack and another person is frustrated. A suspect continues to deny his role in anything while confrontations happen between possible lovers. Questions and demands are made! GH fans will not want to miss out on Monday’s episode of the ABC soap opera.

GH sources show Alexis Davis (Nancy Lee Grahn) runs into her new psychiatrist and wants to know what he is doing there. Could this be the beginning of a new romance for Alexis?

Detective Harrison Chase (Josh Swickard) sits with Willow Tait (Katelyn MacMullen) at The Floating Rib and he demands answers. He wants to know if she has an issue with Brad Cooper (Parry Sheen). Will she reveal that she believes she is baby Wiley’s biological mother?

#FBF: Are you missing #Graceland as much as we are? @VisitGraceland #FlashbackFriday #GH55 pic.twitter.com/BOfeFQVuqZ

Lulu Falconeri (Emme Rylan) is released from the hospital but receives the shock of her life when she comes home and Nina Reeves (Michelle Stafford) is there with Charlotte Cassadine (Scarlett Fernandez) and Spencer Cassadine (Nicolas Bechtel) for a surprise welcome home party. Unfortunately, it terrifies Lulu instead of a happy moment.

General Hospital spoilers reveal Franco Baldwin (Roger Howarth) absolutely refuses to admit he was involved with killing Kiki Jerome (Hayley Erin). Will he work with the PCPD in order to flush out the real serial killer?

Meanwhile, Ryan Chamberlain (Jon Lindstrom) visits his twin brother, Dr. Kevin Collins at the asylum, expressing how frustrated he is that he needs to deal with Kevin and now Laura Webber (Genie Francis) too!

GH’s Laura Webber meets with someone mysterious, telling them that time is of the essence and they need to do it now. Who is she speaking to and what does she have planned?

Be sure to tune into ABC’s General Hospital (GH) on Monday, February 18 to catch up on all these exciting stories and so much more. Check Hollywood Hiccups often for updates, news, rumors and spoilers!

Stay tuned to GH and keep checking General Hospital spoilers frequently to see what the future holds for Valentin and Nina!