Days Of Our Lives Spoilers: Jordan Targets Kate, Ciara Fights For Ben — How Will This All End? 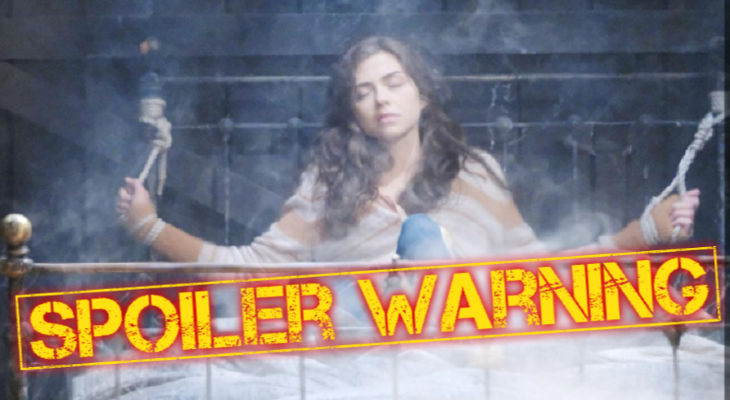 Days of Our Lives (DOOL) spoilers tease there will a battle potentially to the death between Ciara Brady (Victoria Konefal) and Jordan Ridgeway (Chrishell Hartley) over Ben Weston (Robert Scott Wilson) as Ciara bravely tries to save his life.

Jordan had headed to Salem University Hospital after hearing Rex Brady (Kyle Lowder) get a call about his mother and realizes he was talking about Kate (Lauren Koslow).  She knew she needed to finish the job of killing her.

In the meantime, she barely avoids being spotted by Rafe Hernandez (Galen Gering) coming from Kate’s room. She winds up spotting Ben in Ciara’s room, which may not be far from Kate’s. Jordan knocked him out with what appeared to be a metal food tray. She then produces a syringe, which she probably intended for Kate, and goes for Ben’s neck with it, realizing she’s got two more jobs to finish — Ciara and Ben!

Seeing Ben about to be killed by injection of something by Jordan apparently gives Ciara a huge burst of adrenaline. The DOOL spoilers tease that somehow she will jump out of the hospital bed and attempt to overpower Jordan to save Ben’s life.

Jordan and Ciara tangle over the syringe and apparently there are some close calls, with either Ciara or Jordan getting stuck with the syringe. DAYS spoilers mention Jordan, Ciara and Ben’s fight is broken up. It is possible by Ben himself after he finally comes to, realizing Ciara’s life hangs in the balance.

Exactly why Jordan would do a one hundred percent turnaround from grieving Ben’s death is a mystery to the Days of Our Lives viewers. Chad DiMera’s (Billy Flynn) had to lie to her to get her to leave baby Charlotte (Chloe Teperman) with him and Abigail (Kate Mansi) earlier.

For her to try to kill him is further evidence that she’s come totally unhinged.  All it appeared to take was her saying to Rex earlier that Ben perhaps was better off dead, and there she is trying to make it happen!