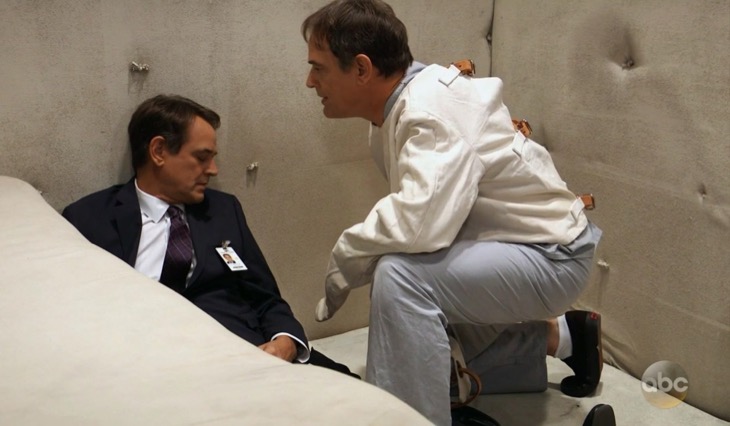 General Hospital fans constantly complain about the Ferncliff staff not being surprised by Ryan (Jon Lindstrom) and Kevin’s (Jon Lindstrom) resemblance. However, Kevin has hidden Ryan at Ferncliff for years and has protected his identity, so should the staff be concerned?

GH Spoilers Everyone Has A Twin

Statistic says that everyone in the world has a twin so the resemblance could easily be a freak look alike thing and nothing more. General Hospital’s Ryan was in Ferncliff under the name Wilson Ridder so why would anyone consider a connection between them? Ryan Chamberlain is supposed to be dead, and Kevin is an upstanding citizen, why would anyone suspect him of hiding his brother? Kevin’s word as a doctor at GH and Ferncliff would be good enough for anyone who works there, why would it not be?

General Kevin Has Done This For Years

General Hospital’s Ryan supposedly died 25 years ago. Kevin has obviously been hiding him for decades to try to rehabilitate him. We have seen a limited about of people interact with Ryan in Ferncliff. The people how have been around him have been warned about the resemblance and aren’t shocked by it. Kevin would not just let people see someone who looks like him without a warning because they would automatically think of Ryan, how could they not?

As Ryan's facade crumbles, he turns to a familiar face to help sort things out. Can Kevin use the meeting to his advantage?
A brand-new #GH starts RIGHT NOW on ABC! @thejonlindstrom #GH55 pic.twitter.com/LCPiOwMLDD

General Hospital’s Mary Pat (Patricia Bethune) was a nurse at Ferncliff, and she knew more than more or Ryan wouldn’t have killed her. The fans should remember that she was threatening Ryan before he decided to kill her. Mary Pat wanted payment to be quiet which implies that asking questions is not a good idea. How do we know how many people died over the years to keep this secret? Kevin could have hand-picked the nurse that is working there now, after all, he is a doctor at Ferncliff.

General Hospital Why Would Any Suspect Ryan Is Alive?

General Hospital’s Ryan was declared dead in a fire. Kevin had had a break before where he thought he was Ryan. No one has any reason what so ever to believe Ryan could be alive. The fact that this started around the anniversary of Ryan’s crimes leads to a copycat killer. No one, including Kevin, realized he kept this victim’s license. No one has any reason at all to suspect Ryan.

General Hospital fans are trying to rush this story when others have gone off for years and expecting conclusions that no one is ready to jump to yet. Sometimes you have to let the story play out until the killer slips up.