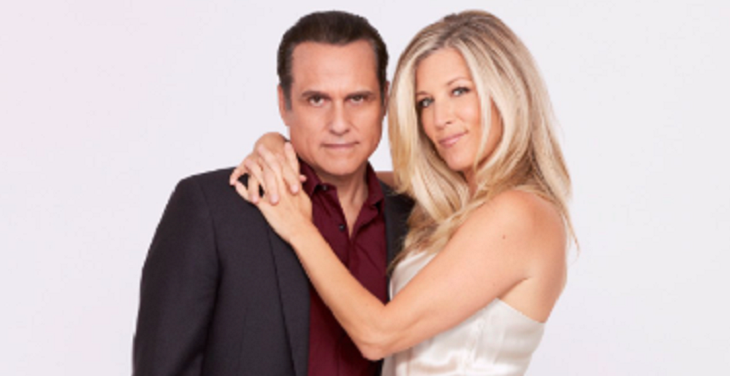 General Hospital (GH) spoilers tease that Carly Corinthos (Laura Wright) will go to her first doctor appointment to make sure she can safely carry her baby.  She will want to know that the baby will be safe too. As Dr. Kim Nero (Tamara Braun) appears to be the only OB/GYN at General Hospital at this time,  it’s quite possible she will book an appointment with her.

However, there are some medical conditions that can cause false positives on a pregnancy test, especially on the home use variety. These tests are super sensitive for detecting a hormone produced in pregnancy, human chorionic gonadotropin, commonly referred to as HCG.

False positives can actually be caused by menopause itself, in which case different tests used by fertility doctors can be taken, which show whether a woman is still ovulating or not. If she’s not, then the false positive results could be caused by other, more dangerous conditions.

WATCH: Sonny knows this baby will serve as a constant reminder of Morgan. But is carrying him or her to term safe for Carly? @lldubs @MauriceBenard pic.twitter.com/JFZ4jbiexe

A pituitary disorder can cause false positive pregnancy results, as can a pituitary tumor. Sometimes the pituitary gland can stimulate the production of HCG even when no disorder or tumor is present.

Ovarian cysts can produce HCG as well, although most go away on their own. Ovarian cysts can only happen if a woman is still ovulating. However, uterine, ovarian, or bladder cancers can also produce false positive pregnancy results.

Here’s What Is Ahead For Carly

Even though Carly is only around six weeks along in her potential pregnancy, Dr. Nero will probably do an ultrasound first before ordering any other tests.  This will make sure a baby is present.

At six weeks, the fetus will have a heartbeat, the spine will look like a little tail at the bottom, the hands and feet will look like little paddles, and tiny eyes are starting to form. Some of the baby’s internal organs will have started to develop, as well.

Sonny and Carly's cozy Valentine's Day hits a bump in the road. Are they ready for what lies ahead? A brand-new #GH starts RIGHT NOW on ABC! #GH55 pic.twitter.com/G4nmihHS6h

Luckily, if the doctor sees a tumor, it’s possible to remove it and Carly will make a full recovery. They only way that can’t happen is if cancer has spread to other organs.  At that point, she would need chemotherapy or other treatment to treat the growth.

At this point, the GH fans hope that the doctor will see a beating heart and the Corinthos family will be welcoming another little one to their family.

Will Carly and Sonny have a blessed event in eight or so months, or will there be even more tragedy to deal with in their lives?

Stay tuned to General Hospital and keep checking GH spoilers frequently to see what happens and how the CarSon pregnancy story develops.