Days Of Our Lives Spoilers: Diana Manipulates John and Marlena To Get What She Wants 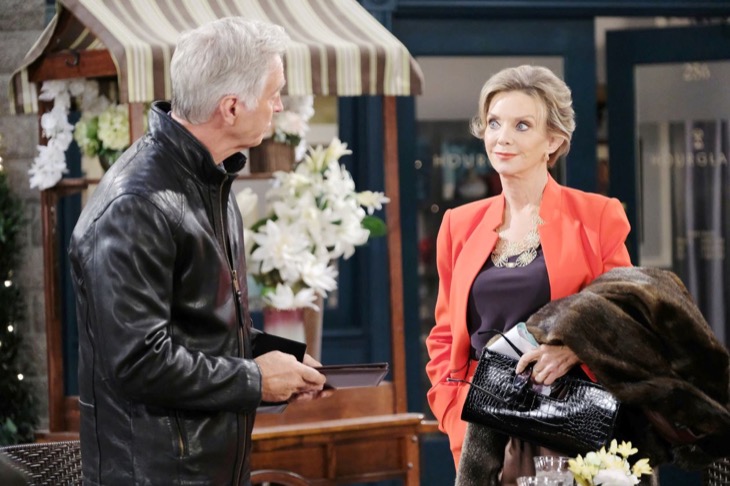 Days of Our Lives spoilers tease that Diana Colville Cooper (Judith Chapman) apparently isn’t a whole lot different than her son Leo Starke/Matthew Cooper (Greg Rikaart); her game plan is to manipulate both John Black (Drake Hogestyn) and Dr. Marlena Evans (Deidre Hall) to get what she wants, which seems to be John! Exactly how she plans to do this has not yet been revealed, but if Leo is an example of his mother, she will probably tell each side of the couple different things to try to break down their trust of each other!

However, Diana has her work cut out for her, as John and Marlena have been through many difficult situations, remaining together through it all with a few gaps. Their love story in a sense began in 1981, when Roman Brady (then Wayne Northrop) and Marlena fell in love, only for Roman to disappear and be presumed dead in 1984.

Then, in 1986, an amnesiac known as “The Pawn” appeared in Salem; he assumed the name “John Black” after seeing it on a Vietnam War memorial. He was later (erroneously) revealed to be Roman Brady, having had extensive plastic surgery.

Valentine's Day may be over but we're still feeling the love. #DAYS pic.twitter.com/drm1ukXqIN

Then Marlena herself disappeared and was presumed dead for many years, and part of that time John, presumed to be Roman, became involved with Diana. Eventually, the real Roman Brady returned, and John was revealed to have been brainwashed to believe he was Roman. John and Marlena, with John, revealed not to be Roman, later on, fell in love and eventually got remarried.

Even though Diana married a Richard Cooper, who was assumed to be Leo’s birth father, who he murdered, she finessed John into assuming he is Leo’s birth father telling him she would save him the trouble of a DNA test and not to tell Leo. That seems to indicate John may in fact NOT be Leo’s father; why Diana would not want Leo to know appears to be a red flag as well.

Days of Our Lives Spoilers: Sarah Has New Doubts About Rex — Asks Eric For Advice –Reveals His True Feelings?

It may be a few months before all the truth is revealed; stay tuned to Days of Our Lives and keep checking Days of Our Lives spoilers frequently to see if Diana is able to break John and Marlena up, or if they stay together and stand together against Diana’s apparent scam!