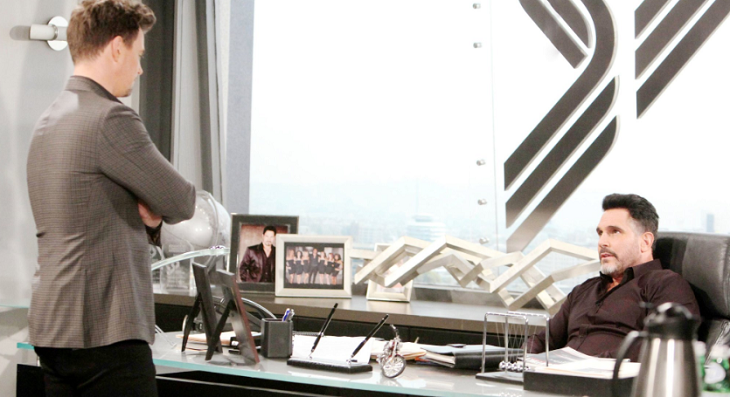 The Bold and the Beautiful (B&B) spoilers for Tuesday, February 19, tease that Reese Buckingham (Wayne Brady) and Florence “Flo” Fulton (Katrina Bowden) will start to panic, as they realize that Zoe Buckingham (Kiara Barnes) is probably on the verge of telling Steffy Forrester (Jacqueline MacInnes Wood) the truth about the identity of her baby Phoebe Forrester (Isabella de Armes and Redford Prindiville).

Zoe wants To Tell Steffy All

And they’ll be right to be panicked, as Zoe will be at Steffy’s house, ready to spill the whole story to Steffy. Flo and Reese will desperately brainstorm to figure out a way to quickly stop Zoe from spilling the truth. Perhaps Reese will call or text Zoe to remind her of what’s at stake if she spills the beans.

Or perhaps Zoe will have second thoughts on her own. Whatever the case, it looks like Zoe won’t reveal the truth that Phoebe is actually Hope Spencer (Annika Noelle) and Liam Spencer’s (Scott Clifton) daughter Beth Spencer.

Perhaps Zoe will think about her father potentially going to jail and losing his medical license or getting into more trouble with the loan sharks who started his whole mess, to begin with.

The walls are closing in this week on #BoldandBeautiful. Don't miss it! pic.twitter.com/qQSf48pr18

Meanwhile, on the new B&B episode on Tuesday, February 19, Wyatt Spencer (Darin Brooks) will get an intriguing offer from his dad Bill Spencer (Don Diamont). Bill will ask Wyatt to return to Spencer Publications and will offer him a great deal if he does so. Bill is all about reuniting his family right now, and he’ll want to welcome Wyatt back into the fold.

Bill Asks Wyatt Work For Him

But Wyatt may be a bit skeptical of the offer, since the last time he was employed by Spencer, things didn’t go so well. Bill ended up firing Wyatt in retaliation after Wyatt spilled the beans to Liam about how Bill lied and schemed to keep Liam apart from Steffy. It was a bad scene, and Wyatt will probably want some assurances from his father that similar nonsense won’t occur this time around.

It looks like Wyatt will have a big decision to make. He’ll seriously consider going back to work for his dad, but he’s got a couple things to consider. First off, he’s already got a good job at Forrester Creations heading up Forrester’s social media campaigns. And then there’s Sally Spectra (Courtney Hope) to think about, too.

The Bold and the Beautiful Tuesday, February 19 Spoilers: The Walls Are Closing In On Reese

Wyatt enjoys working with Sally at Forrester, and he won’t want to hightail it out of Forrester and just leave her there. According to B&B spoilers, Wyatt will soon devise a plan to have Sally come with him to Spencer…that is, if he can get his dad on board with the plan.