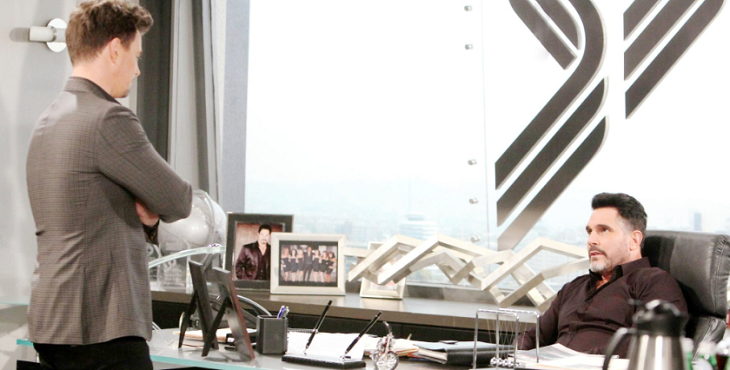 The Bold and the Beautiful (B&B) spoilers for Wednesday, February 20, tease that Sally Spectra (Courtney Hope) will be in for a big surprise. She’ll get an earful from Wyatt Spencer (Darin Brooks) after his big meeting with Bill Spencer (Don Diamont). At the meeting, Bill begged Wyatt to return to Spencer Publications again, and Bill even offered Sally a position at the company to sweeten the deal.

Sally will be stunned by the news. First off, she’ll be surprised that Wyatt is actually considering the offer, given everything that Bill did to Wyatt and the rest of his family last year. And she’ll be amazed that Bill actually offered her a job at Spencer as well. Bill and Sally aren’t exactly on good terms, so that will seem a bit odd.

But Wyatt will explain that Bill is trying to be a better father and that he wants to bring his family closer together. Bill’s really been trying to be a better person lately, and the job offer to Sally is really an olive branch to try to make things better in his relationship with Wyatt and to make amends to Sally as well.

Sally will see that Wyatt’s relationship with Bill is important to him, and that he’s seriously considering working with his dad again. She’ll offer her full support to Wyatt and let him know that whatever he chooses to do, she’ll back him. But she may not be fully on board with hopping ship to Spencer herself.

Wyatt Uses Sally As A Compromise

That’s when Wyatt will get an idea. He’ll decide to present Bill with a counteroffer. Wyatt will plan to tell Bill that he’ll go back to Spencer if and only if Bill agrees to revive Spectra Fashions for Sally. Wyatt knows that Sally would love nothing more than to have Spectra back and be in charge of her own fashion house again.

Sally will adore the idea, and she’ll be honored that Wyatt would do such a thing for her. She may be a bit nervous that Bill may reject the idea, but it looks like Wyatt will be pretty confident that he can swing the deal with his dad. After all, if Bill wants Wyatt back at Spencer, then those are the terms.

Meanwhile, on the new B&B episode on Wednesday, February 20, Donna Logan (Jennifer Gareis) will get a surprise call from her ex, Justin Barber (Aaron D. Spears). Justin will call a secret meeting with Donna, and the topic will be Bill and Katie Forrester (Heather Tom).

SNEAK PEEK at Next Week: Wyatt shares with Bill that Thorne annulled his marriage to Katie. Reese and Flo worry about Zoe’s next move. Justin and Donna spend time together while playing matchmaker for Bill and Katie. Hope hints to a change. #BoldandBeautiful pic.twitter.com/HMn3pge6nl

Justin and Bill recently had a conversation in which Bill touted the importance of his family, and especially the family he once had with Katie and Will Spencer (Finnegan George). Justin sensed that Bill would like to get closer to Katie again, and perhaps even get back together with her.

Justin will likely have some questions for Donna about Katie’s state of mind right now. Of course, Katie is still reeling from Thorne Forrester’s (Ingo Rademacher) exit from her life, but Justin thinks there’s a possibility that Katie might be open to reconciling with Bill. He’ll want to scope out that possibility and see what Donna knows.

The Bold and the Beautiful Recap Tuesday, February 19: Zoe Struggles With The Truth, Bill Asks For A Second Chance

Justin and Donna will compare notes, and it looks like the two of them will embark on a matchmaking scheme to try to get Bill and Katie back together. We’ll see what the two of them have in mind, but look for them to find ways to push “Batie” together in the near future.