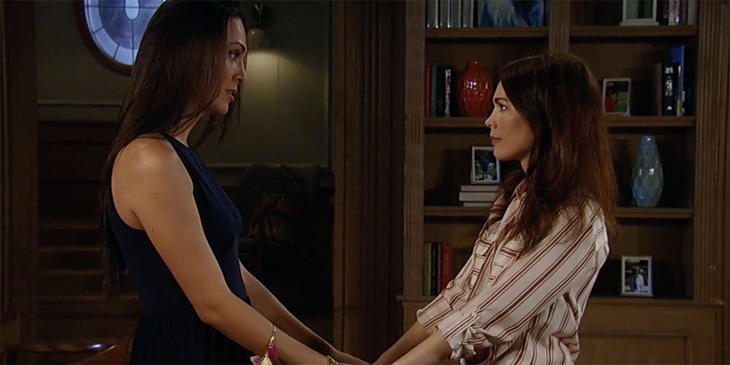 Terry and Liz have known each other since childhood, and Liz will feel like she can confide problems to Terry that she may not feel comfortable with anyone else knowing about them. There has already been backlash in the family from Cameron Webber (William Lipton) who’s not buying Franco’s innocence and has already been in one fight at school trying to defend his mother’s honor. He will go ballistic finding out his mother actually married Franco, and in the Port Charles jail at that!

There will be even more heartache and confusion for Liz in the coming weeks, once Franco has been convinced to go along with the plan Commissioner Jordan Ashford (Briana Nicole Henry) has for flushing the real killer out. He will not be able to have anyone else in the loop besides he and Jordan, not even Liz, and apparently not even Scott Baldwin (Kin Shriner), his father and lawyer!

Jordan has an idea that might be too crazy of a pill for Franco to swallow. But what other options does he have? @Bri_Nic_Henry
An explosive, new #GH starts RIGHT NOW on ABC! #GH55 pic.twitter.com/UISPfv4k3N

It doesn’t sound like DA Margaux Dawson (Elizabeth Hendrickson) is in on the plan either! The DA and Scott should be in the loop, even if no one else is, but maybe Jordan didn’t think she could sell Margaux on her plan, and Scott certainly would not have agreed to it, and would have advised Franco not to bite!

Terry, with her training as a pediatric oncologist, will both be able to remain objective about the terrible situations Liz and her boys are finding themselves in because of Franco’s trumped-up charges, and be able to offer compassion both as a friend and her training. Terry undoubtedly goes through times in her life where she needs a shoulder to cry on too; it’s pretty hard on an oncologist, which is a cancer doctor, to have to tell patients and their families there is no hope; and even worse when it involves children.

Liz and Terry will continue to lean on each other as both their stressful situations play out! Keep watching GH and keeping an eye on General Hospital spoilers frequently to see how Liz and Terry make it through these situations!