Welcome to your Thursday, February 21st General Hospital recap! We begin our day at Carly’s (Laura Wright) house where she’s leaving a message for Olivia (Lisa LoCicero) about reducing her workload. Sonny (Maurice Bernard) is reminding her that she needs to be careful with her health.

Josslyn (Eden McCoy) walks in and says “mom, are you sick?” Carly says she’s just had a check-up and all is fine (she doesn’t tell Josslyn she’s pregnant.) Josslyn brings up the car trip and that Oscar doesn’t have his license.

Carly figures out that Josslyn wasn’t going to tell Kim (Tamara Braun) about the road trip. Cameron shows up and says he needs to talk to Josslyn. He explains that Franco pleaded guilty and his mother married a monster. Josslyn says they should leave on their road trip tomorrow.

On the pier, Sam (Kelly Monaco) and Jason (Steve Burton) meet up. Jason finds out that a former member of Day of Dawn died of a drug overdose and Shiloh was the main suspect. Sam says Shiloh has a history of manipulating women and Jason insists on a GPS placed in her phone.

Shiloh (Ryan McLaughlin) is sitting at the café when his friend Harmony (Inga Cadranel) from Beecher’s Corner arrives. Harmony says she came all this way to give him a warning. They discuss the Jason (Steve Burton) situation and she mentions that a detective came to see her.

At the courthouse, Ava (Maura West) confronts Franco (Roger Howarth) and asks how he could kill Kiki. She storms away and runs into a smiling “Kevin” (Jon Lindstrom). Ava says to “Kevin” that she’s not sure she’s cut out for love and the pain of losing Kiki is too much.

“Kevin” suddenly asks Ava to marry him. (wow!) Ava says he can’t be serious and that for starters he’s still married to Laura (Genie Francis.) “Kevin” says that Ava belongs with him and he wants her to be his wife, his goddess. Ava says to Kevin: that she’s never been married (I didn’t know that!). Ava agrees to marry “Kevin.”

Curtis (Donnell Turner) enters the courthouse to speak to Lulu (Emme Rylan) about if she stills needs his protection. Lulu says she doesn’t feel closure.

Across the room, Franco tears up and says to Jordan (Briana Nicole Henry) that because of her stupid plan (really stupid IMO) he may have lost the one person who really loves him. Jordan says Franco will be exonerated but he’s worried something could go wrong. Lulu looks at Franco and has a flashback to the attack and almost collapses.

Elizabeth (Rebecca Herbst) arrives home visibly upset. The doorbell rings and its Drew (Billy Miller), they embrace. Elizabeth says none of this makes sense why would he admit guilt? Cameron shows up and overhears that Franco pleaded guilty.

He’s super angry and tells Liz if she believes Franco then “she has completely lost her mind!” Elizabeth insists that Franco didn’t do it. Cameron yells at her mom til Drew interferes.

Cameron storms out and leaves Liz in tears. Elizabeth still insists that there must a be reason he pleaded guilty. She starts crying looking at her wedding rings.

At the hospital, Anna (Finola Hughes), Robert (Tristan Rogers), and Finn (Micahel Easton) are checking on Dr. Cabot after his surgery. Anna asks him how she contracted the virus that caused her blindness. Dr. Cabot is being difficult and threatening not to tell them anything more.

Anna is upset about the whole situation and wonders how this virus came to be. Dr. Cabot wakes up and has his site back. Anna asks about her sister Alex and Dr. Cabot says she was part of the experiments because they are twins.

He explains he wanted to study the links between twins, both the pain and the joy. Anna accuses him of lying because she was never part of the experiments. Dr. Cabot says. “Yes you were Anna, you just simply don’t remember.”

Lulu and Curtis are now at General Hospital and run into Sonny. Lulu tells Sonny that Franco pleaded guilty to the murders. Sonny calls him a sick son of a bitch. Lulu wonders why she why she can’t remember the full attack.

Robert walks up to them and Lulu questions if he has any info on Dante’s (Dominic Zamprogna) whereabouts. Robert says separately to Sonny that Dante has gone “rogue”. 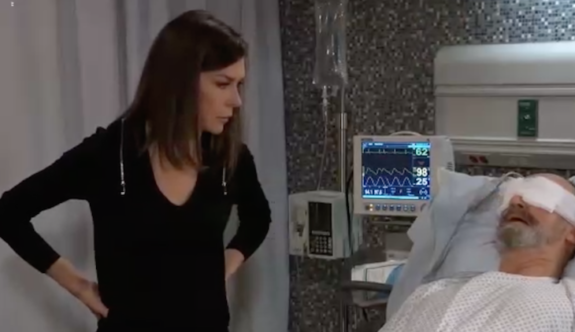 Franco arrives at Ferncliff and puts on the standard uniform while getting obligatory photos done. Jordan comes in to check on Franco and he worries that now maybe Liz will be in danger from the real killer.

Shiloh calls Sam and says that he wants to leave tonight. Sam says okay and Shiloh says what she’s going to see will “change her life.”