The Young and the Restless (Y&R) spoilers for Friday, February 22, tease that Nikki Newman (Melody Thomas Scott), Victoria Newman (Amelia Heinle), and Sharon Newman (Sharon Case) will each be led into the courtroom. The women will briefly have words, and they’ll notice that Phyllis Summers (Gina Tognoni) is conspicuously absent.

Before the hearing starts, Michael Baldwin (Christian LeBlanc) will confer with his clients Nikki and Victoria, and Brittany Hodges (Lauren Woodland) will separately confer with her client Sharon, but the message will be the same: Plead not guilty and don’t say anything else.

Mariah Copeland (Camryn Grimes) will offer Sharon her support, but Mariah will be worried that Victor, Nikki, and Victoria might turn on Sharon. Sharon won’t be as worried, and she’ll try to calm Mariah’s nerves. Mariah will be concerned that something she said to Christine Williams (Lauralee Bell) may have made things worse for Sharon, but in typical Sharon fashion, she’ll tell Mariah not to worry about that. 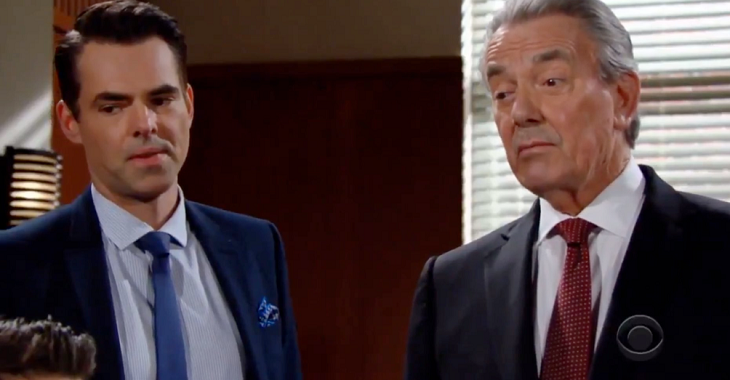 Meanwhile, at Nick Newman’s (Joshua Morrow) place, Phyllis will balk at the idea of attending the arraignment hearing, but Nick will insist that she be there. Phyllis will offer excuses for why she shouldn’t go, but Nick will persist, and ultimately Phyllis will agree to go. She’ll call Christine and let her know that she’s going to be present.

Back at the courtroom, Phyllis and Nick will arrive with all eyes on Phyllis. The rest of the coverup crew will be stunned to see Phyllis as a free woman, and as the hearing starts, Christine will announce that her big witness is Phyllis. During a recess, Nick will turn on Phyllis and accuse her of rolling over on his family, while Phyllis tries to make excuses for her actions.

Then Victor Newman (Eric Braeden) will approach Phyllis and let her know that if his wife and daughter go down as collateral damage, she’ll have him to deal with. Phyllis will look unnerved but defiant. As the hearing starts back up, Nikki will plead not guilty to second-degree intentional homicide and obstruction of justice, and Sharon and Victoria will enter their not guilty pleas next.

Finally, Christine will argue that the defendants are all serious flight risks and that they should all be denied bail. The judge will agree, and Nikki, Victoria, and Sharon will be remanded into custody until trial.

At Jabot, Summer Newman (Hunter King) will track down Kyle Abbott (Michael Mealor) and rage at him about his conversation with Rey Rosales (Jordi Vilasuso). Summer didn’t appreciate being questioned like a suspect, and she and Kyle will argue.

During their argument, Summer will admit to Kyle that she loves him and that she understands how he feels about Lola Rosales (Sasha Calle) because she feels the same way about Kyle.

Rey Gets A Clue

At the police station, Rey Rosales (Jordi Vilasuso) will get to inspect a key piece of evidence in case of his Lola’s assault: the coat Lola was wearing on the night of the attack. Rey will recognize the coat as Abby Newman’s (Melissa Ordway), and that will get the wheels turning in his head.

From there, Rey will head to the hospital to check on Lola’s condition, but there will be no change. While he’s there, he’ll witness Abby apologize to Mia Rosales (Noemi Gonzalez) for starting the catfight the two ladies had on Valentine’s Day evening.

Later, Rey will grill Mia about the fight, but Mia will quickly change the subject and suggest nervously that Lola’s attack was possibly meant to send Rey a message about the JT Hellstrom (Thad Luckinbill) case. Rey will play Mia a bit and thank her for her suggestion, but he’ll insist that he’s going to find out whoever attacked his sister.

The Young and the Restless Spoilers: Victor Threatens Phyllis, Devon Faces Another Setback