Days of Our Lives Spoilers: Gabi Desperate For GabiChic Help –Will Brady Buy The Company? 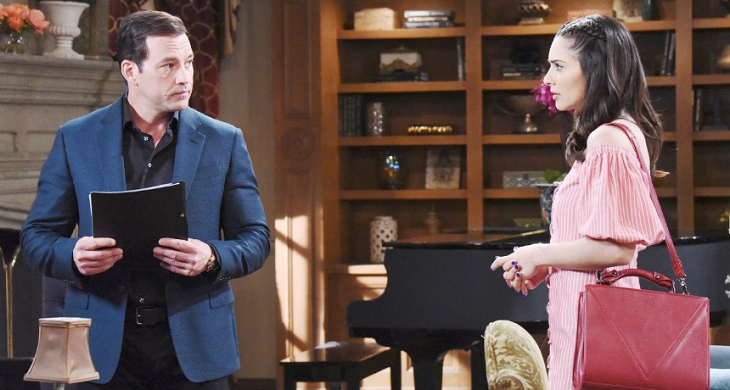 Days of Our Lives (DOOL) spoilers tease that Gabi Hernandez (Camila Banus) will turn to Brady Black (Eric Martsolf) for help after Stefan DiMera (Tyler Christopher) fires her from her own company, GabiChic, and threatens to shut it down! Now, Brady is the newly appointed CEO of Titan Industries, which is the main competitor of DiMera Industries, which Gabi Chic is currently owned.

Gabi had repeatedly begged for it not to be shut down, and before Chad DiMera (Billy Flynn) left he had been able to prevent that for a little while. Will she ask Brady for his help by asking him to buy it out from Stefan?

Kate DiMera (Lauren Koslow) hadn’t given Gabi a whole lot of hope when she went to her for help from the DiMera board of directors, but then Kate may not have had time to talk to them yet. After all, she was just in the hospital recovering from a near-fatal attack by Jordan Ridgeway (Chrishell Hartley)!

Then, practically immediately after being released from the hospital she attended Chad and Abigail DiMera’s (Kate Mansi) wedding at the Horton home! Nevertheless, Gabi’s feeling pretty desperate, because Gabi Chic is her only way of making a living for herself and her children.

The jig is up, Jordan. You can't hide from Kate. #DAYS pic.twitter.com/0JymCnoF3B

Brady Wil Be A Tough Sell

If Chad had still been in Titan’s employ as he was a few months ago, he may have bought Gabi Chic simply to spite Stefan, although that was before Gabi’s deceit concerning Abby, “Gabby”, and Charlotte DiMera (Chloe Teperman at that time) was busted wide open by Julie Williams (Susan Seaforth Hayes)!

Chad had still had a little friend love and trust in Gabi then. Brady may be a bit of a harder sell, not to mention he will want to run any potential purchase of a company by Victor Kiriakis (John Aniston) and possibly Titan’s board of directors as well.