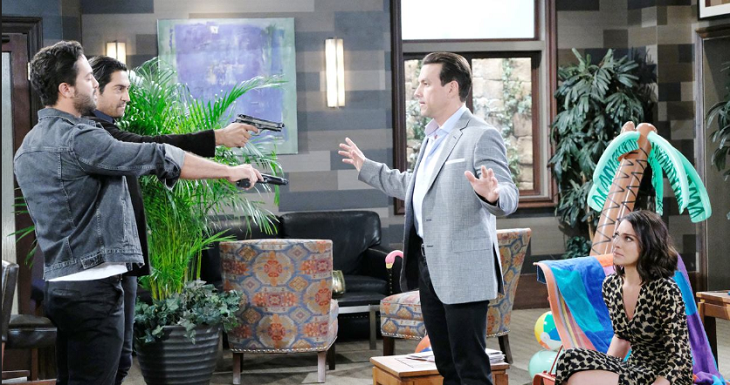 Days of Our Lives (DOOL) spoilers tease that Chloe Lane (Nadia Bjorlin) may still be not out of danger from El Fideo’s (Noshir Dalal) remaining goons, in spite of being in a protected mansion with Stefan DiMera (Tyler Christopher). Other Days spoilers tease that she may have a stalker, or some obsessed opera fan keeping an eye on her at work, but it’s just as likely that the goon that Stefan scared away will come back, and bring his friends!

After all, even though Stefan’s dropping his late father Stefano DiMera’s (Joe Mascolo) name seemed to scare the one goon away, there’s always a chance that he’ll find out Stefano’s dead and Stefan was bluffing!

Plus, now there are two people dead that the remainder of the El Fideo gang may want to avenge; El Fideo himself and the goon that Stefan killed in self-defense and defense of Chloe! One would think the goon that ran was not quite as loyal as the one that died, but there is still at least one death to avenge even if the goon who died wasn’t all that important.

In the latest #DAYS, Stefan risks his life to save Chloe's.https://t.co/ZsCmioRrzb pic.twitter.com/l0F3RJ5AXI

Other Days of Our Lives spoilers tease that Stefan will even rehire Ben Weston (Robert Scott Wilson) as his head of security, to provide extra layers of protection against the goons, just in case they would show up. Stefan himself won’t want to tangle with them again, especially if there are more of them!

Chloe still won’t feel totally safe at work though; she feels as though she’s being watched, and even though this may just be a reaction to what happened during the original attack, a beautiful woman like Chloe can’t be too careful with so many predators out and about.

Days of Our Lives Spoilers: Gabi Desperate For GabiChic Help –Will Brady Buy The Company?

It might be a good idea to get some extra security at work and on the way there and back! Stay tuned to Days of Our Lives and keep checking DOOL spoilers frequently to see how this intense storyline plays out.