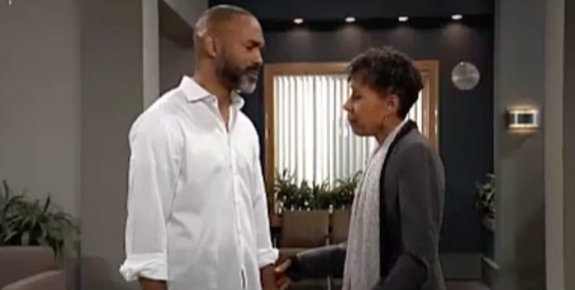 Welcome to your Monday, February 25 General Hospital recap! We begin our day with Jason (Steve Burton) in a hospital bed waking from a dream, Carly (Laura Wright) is sitting by his bedside. Carly says she’s been there all-night keeping vigil.

Anna (Finola Hughes) enters Jason’s room to check on him and tell him why he went blind. She brings up the virus and the symptoms that lead to blindness. She explains this was for memory transfer purposes from Dr. Andre Maddox (Anthony Montgomery.)

Carly is pissed off as Anna explains Dr. Cabot’s part in the experiments. She explains the memory transfer studies and that she and Alex were the first patients of the twin experiments. Anna explains that both he and Drew suffered retinal hemorrhages at the same time. Jason asks if Anna has Alex’s memories.

Anna leaves and Carly acts jealous of Anna and Jason’s friendship. She starts yelling until Jason tells her that they are best friends and not to worry. Carly blurts out that she’s pregnant as Jason stares shockingly.

Jason asks if she’s sure and Carly says she’s surprised by the pregnancy herself. Sam comes into the room and embraces Jason. Carly asks Sam how far she’s going to take this investigation of Shiloh. They start yelling until Jason says, “Carly’s pregnant!” Sam tears up and embraces Carly, she smiles and says congratulations.

In the hospital hallway, Sam (Kelly Monaco) is sitting with Shiloh (Ryan McLaughlin) and thanking him for spending the night waiting at the hospital. Shiloh is questioning how Jason knew where they were going. Sam says that Jason has been trying to fix their relationship and she’s not having it.

In another hospital room, Finn (Michael Easton) is asking Drew (Billy Miller) what the last thing is he remembers. Drew says he was in the garage and asks, “Did I hit anyone?”

Kim (Tamara Braun) and Finn explain that he should be okay in a few days. Drew says he remembers getting in his car in the garage and Kim reveals that Jordan was hit. Kim explains how gravely injured Jordan is and that she’s unconscious. Drew shows up at Jordan’s hospital room and apologizes to Curtis.

In a third hospital room, Curtis (Donnell Turner) is talking to Jordan (Briana Nicole Henry) who is unconscious. He asks Jordan to give his hand a little squeeze as he tears up, Curtis steps outside where Stella (Vernee Watson Johnson) is waiting and he asks if the doctor has told her anything.

Stella says that her ribs were broken and one of her kidneys is ruptured. She’s at a 4 out of 5 in terms of the danger zone. Stella and Curtis start to pray. Curtis is keeping vigil at Jordan’s bed telling her how much he loves her (lots of tears).

Stella is sitting by Jordan’s bed and says she need to apologize to her. She says she was wrong about her and was unjustly angry at her all this time. Stella says she will do everything she can to make it up to her. Stella realizes that Curtis has been eavesdropping. Suddenly Jordan’s machines start blaring, she needs emergency surgery!

Maxie (Kirsten Storms) and Peter (Wes Ramsey) are at the Metro Court discussing the DNA testing. She has not heard an answer back yet. Valentin comes over and asks to speak to Peter privately, he asks him to be his best man.

Peter questions his motives, but eventually accepts and says he would be honored. Peter comes back down to his table with Maxie and tells her the best man news. Peter says he’s going to use this opportunity to spy on Valentin. Maxie’s phone rings and says the DNA results are in. They check them on her phone and results are wrong, she must have grabbed the wrong DNA.

At the Metro Court, Sasha and Valentin are at a table discussing Nina (Michelle Stafford.) Valentin says he thinks Sasha should leave town. Nina takes Sasha up to her office to discuss wedding plans. Nina is determined to have Sasha stay in town and be a part of the wedding. Sasha says she will need to think about staying in town. Valentin walks in and tells Nina that he chose Peter as his best man.

Dr Cabot is getting coffee when Anna and Finn approached him and says they need to talk. She asks him if he was actually able to transfer memories between her and Alex. Anna continues to push Dr. Cabot for answers and threatens to jail him. He takes a phone call and tells someone on the phone that “there is a cure.”

Sam and Jason discuss her plan against Shiloh and how she will need his help. They start kissing and the audience can see Shiloh standing at the doorway. Fade to preview…..