The Young And The Restless Spoilers: Christine Grills Mariah In Court — Michael Brings Out The JT Truth 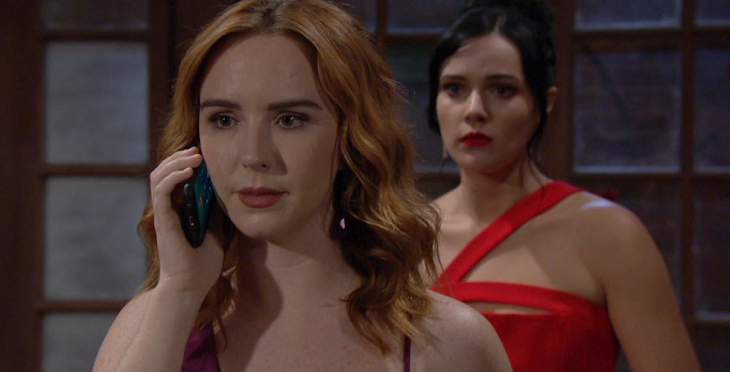 The Young and the Restless (Y&R) spoilers for the week of February 25 tease that Mariah Copeland (Camryn Grimes) will face some heat about the tape during the cover-up crew’s murder trial. She will struggle to answer Christine Blair’s (Lauralee Bell) questions without incriminating her girlfriend Tessa Porter (Cait Fairbanks). Here’s what you need to know about what’s ahead on Y&R.

Genoa City’s DA calls Mariah as her first witness.  Christine asks Mariah about the video that was found on the Dark Horse server. Mariah struggles to answer her question without exposing Tessa as the one who taped the video.

The last thing that Mariah wants to do is reveal that Tessa was the one who had the video. Y&R fans will recall that Tessa used the video to blackmail Sharon Newman (Sharon Case), Nikki Newman (Melody Thomas Scott), Victoria Newman (Amelia Heinle) and Phyllis Abbott (Gina Tognoni). And, as a result of the blackmail, Nikki paid $250,000 to keep her quiet.

Good Morning Los Angeles! Don't miss @MelodyThomasSco this morning at 6:50 AM on @CBSLA to chat about 40 years as Nikki Newman! #YR @CBSDaytime pic.twitter.com/Vil5PLxNF6

And, Mariah manages to answer Christine’s questions without incriminating Tessa. However, Michael Baldwin (Christian LeBlanc) notices that Mariah is not being honest and he corners her to find out why.

When it is Michael’s turn to cross-examine, he asks Mariah to reveal who it was who really found the video. He tells her that it wasn’t any of the women involved in the case. Mariah knows he is telling the truth, but she doesn’t want to expose Tessa as the one who used that video to extort the Newmans out of a quarter of a million dollars.

What will Mariah do? Will she reveal Tessa role to protect her mother? Or, will she stay quiet and claim that she doesn’t know anything more?