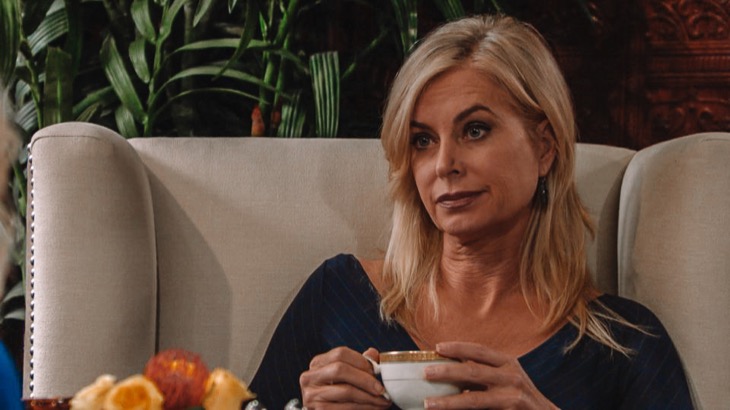 The Young and the Restless (Y&R) spoilers tease that  Eileen Davidson will be returning to the CBS soap opera starting Thursday, March 28.  She has booked a two-day stint and her storyline will be a pivotal Abbott moment.  So, what does that mean exactly?

Ashley Is A Jabot Board Member

The most obvious reason for her return is to vote for a new Jabot CEO.  The Abbott men — Jack (Peter Bergman), Kyle (Michael Mealor), and Billy (Jason Thompson)–have decided to dethrone Phyllis (Gina Tognoni) after her recent arrest and later shady deal with Christine Williams (Lauralee Bell).  Kyle or Billy may call Ashley to let her know that she needs to come home to deal with the Jabot drama.

Of course, she could phone in her vote.  If you recall, Kyle phoned in his vote last year when he voted against his dad.  But, she won’t be phoning in her vote, she will be coming to Genoa City.

Ashley And Jack Face Off

The Young and the Restless spoilers state that Jack and Ashley will exchange words.  It isn’t clear if they will patch things up or if things will get even more intense between them.  All we know if there will be some type of exchange between them.  Let’s hope Hacky and Ash can put the drama behind them.

Let’s not forget that Traci (Beth Maitland) will be returning too.  She should be appearing around the same time.  So, with them both coming back, could there be some Abbott family event going on?

Jack will always be there for Abby. ❤️ #YR pic.twitter.com/61YK1P56yd

Abby Newman (Melissa Ordway) will be getting married soon.  There has been no date dropped on the show.  All we know is she wants to get married as soon as possible.

The lucky groom, Arturo (Jason Canela) is ready to start his life with Abby, but he still has feelings for his first love Mia Rosales (Noemi Gonzalez).  He has been steadily denying any romantic feelings for Mia, but the Y&R fans know he’s just lying to himself.  Before Abby’s wedding, it’s almost a guarantee Mia and Arturo will hit the sheets and Abby will walk in on them.

The Young and the Restless Spoilers For Tuesday, February 26: The Abbotts Plan A Takeover — Lola Needs Surgery

Why do you think Ashley is coming back to Genoa City?  Don’t forget to come back later to Hollywood Hiccups for more The Young and the Restless (Y&R) spoilers, news, and casting updates!