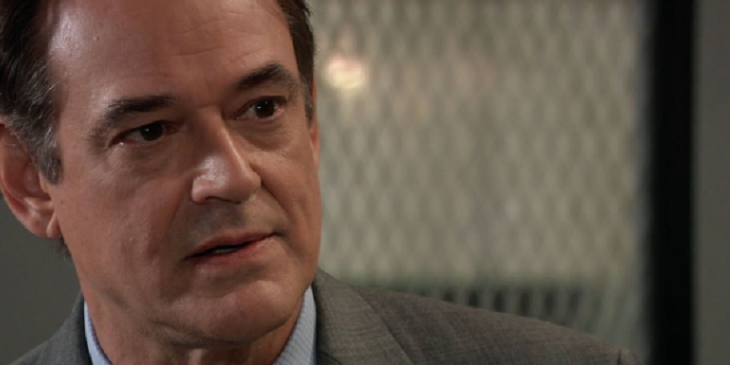 General Hospital (GH) spoilers tease that it’s going to be an exciting Friday, March 1 on GH! First, Curtis Ashford (Donnell Turner) is extremely concerned about his wife Commissioner Jordan Ashford (Briana Nicole Henry), who had to have one of her damaged kidneys removed when her blood pressure shot up too high. He encounters Dr. Hamilton Finn (Michael Easton) and asks him how Jordan is. Will Finn have good news or bad news for Curtis?

Wes Chats With Anna And Robert

Then we see Anna Devane (Finola Hughes) and Robert Scorpio (Tristan Rogers) having a meal with Peter August (Wes Ramsey). Anna tells Peter, “We need to talk.” Peter asks, “What about?” Robert responds, “About dealing with your life”. Will the discussion be about the possibility of Alex Marick being Peter’s real mother, or is Robert calling in the information on Patients 1-5 at the Boronsky Clinic?

Next, Mac and Felicia Scorpio (John J. York, Kristina Wagner) are seen talking with Lulu Falconeri (Emme Rylan) who has probably come to them for information about the original Ryan Chamberlain (Jon Lindstrom) case, since she can’t get in contact with her mother, Mayor Laura Webber (Genie Francis), who of course is still locked in the basement of Ferncliff with her still husband the real Dr. Kevin Collins (Jon Lindstrom) thanks to Ryan Chamberlain himself!

Lulu thinks going back to her office will help fill in the blanks… but is she underestimating the emotions that'll come with it? @teenystweeting
Tune into a dramatic, new #GH – STARTING NOW on ABC! @EmmeRylan pic.twitter.com/jkUd2jHzaE

She probably has asked about coincidences between the original case and the current case, because Felicia responds, “There are no coincidences where Ryan Chamberlain is concerned” Could Mac, Felicia, and Lulu be figuring out that Ryan is alive and killing in Port Charles?

Then we see a livid Ava Jerome (Maura West) letting her fiancé “Kevin Collins” have it with both barrels! She demands answers from him about why he didn’t tell her he was going to go visit her daughter’s killer, who she now believes is Franco Baldwin (Roger Howarth). Little does she know who really killed Kiki Jerome (Hayley Erin) but undoubtedly she will soon!

Franco's interview is only the tip of the iceberg. Re-live yesterday's #GH in anticipation of tomorrow's all-new episode! Click to watch – RIGHT NOW: https://t.co/VhEPwRMpI5 #GH55

Last of all Jason Morgan (Steve Burton) cautions Carly Corinthos (Laura Wright) strongly, saying “Finding out is not worth putting you and your baby’s life at risk!” Could Carly’s curiosity about “Patient Wilson” at Ferncliff have been aroused again after hearing or reading the transcript of Lulu’s interview with Franco?

General Hospital Spoilers: Ryan Cannot Control Franco — Will He Try to Kill Him?

Stay tuned to GH and keep checking General Hospital spoilers frequently to see all the exciting developments and news!