The Bold and the Beautiful Recap For Thursday, February 28: Quinn And Eric Worry–Katie And Bill Grow Closer 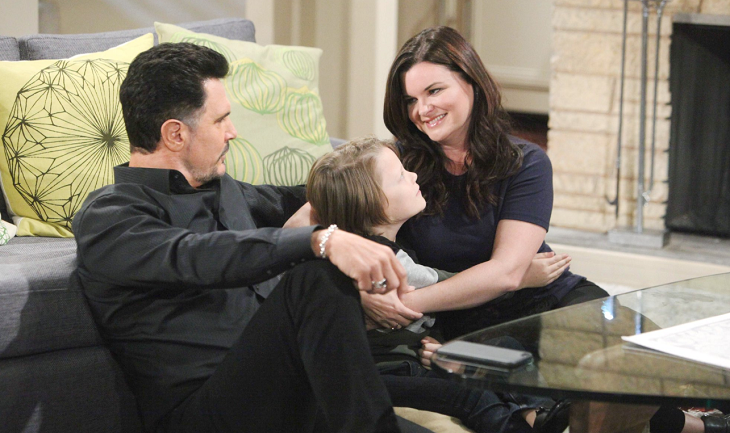 The Bold and the Beautiful (B&B) recap for Thursday, February 28 finds that Sally tells Eric and Quinn about her move. Hope is having second thoughts while Bill and Katie think about the next step to their relationship.

Hope Tries To Give Liam Away

Over at Steffy’s (Jacqueline MacInnes Wood) cliff house, Hope (Annika Noelle) is still acting bizarre. She tries to give Liam (Scott Clifton) back her wedding ring while insisting that she’s only doing what’s best for Phoebe and Kelly. Liam is fighting for their marriage and pleading with Hope to reason with him.

Steffy chimes in by telling Hope that she shouldn’t worry so much about the girls. Ironically, Liam points out that he’s not something or someone that can be given away. He promises Hope that he will love the girls as much as he will love and honor her and their marriage. When Steffy goes to check on Phoebe, Hope apologizes for her behavior.

Over at Forrester Creations, both Sally (Courtney Hope) and Wyatt (Darrin Brooks) have a huge announcement to make. Quinn (Rena Sofer) thinks that it has to do with their relationship, but Wyatt tells her and Eric (John McCook) that they are moving to Spencer Publications to work with Bill Spencer. Wyatt understands that this is a sensitive matter and assures Eric that he’s grateful that all he’s done for him.

Quinn, meanwhile, is worried that Bill might end up hurting Wyatt and Sally like he’s done so in the past. Quinn and Eric wish Sally and Wyatt the best and everyone leaves on good terms. Sally then tells Wyatt how happy she is that everything is going so smoothly.

Bill And Katie Get Closer

At Katie’s (Heather Tom) house, Will tells his parents that he’s happy they are back together again. Katie then tells the young boy that they are still separated while Bill (Don Diamont) promises him that their bond will never be broken.

Will’s happiness turns to sadness, as he was hoping that they would act like a couple again. After Will goes back to his room, Katie tells Bill that she appreciates everything that he’s done for them so far. She says that everyone is in a better place, thanks to Bill.

Bill then wonders about their own relationship. He tells Katie that as much as he loves seeing Will, he loves seeing Katie just as much. This makes her blush and wonders what steps they should take next.