The Young And The Restless Spoilers: Billy And Jack Scheme–Remove Phyllis As CEO– Big War Brewing 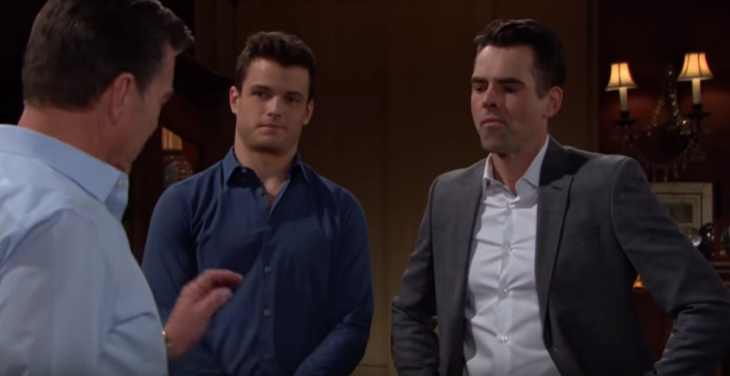 The Young and the Restless (Y&R) spoilers tease that the Abbotts will start scheming for a way to remove Phyllis Abbott (Gina Tognoni) from the coveted Jabot CEO chair.   Jack Abbott (Peter Bergman) will probably want to throw his name in the hat to take over his family’s company.  He will encourage Billy (Jason Thompson) and Kyle Abbott (Michael Mealor) to do the same.  Here’s what you need to know about what’s coming up on Y&R.

After Phyllis’ arrest, the Abbotts begin to plot a hostile take over.  They decide that Phyllis being head of the company could cause a scandal that would affect the reputation of their family legacy.  Kyle, Jack, and Billy decide to remove her with the plan of replacing her with a blood Abbott.  But, the men know that Phyllis will not give up the chair easily, so they prepare for war.

Y&R spoilers state that Jack knows that he probably wouldn’t be able to get the board approval to take over the company again. However, he thinks his son Kyle would have a good chance.  Jack works to get Billy’s approval to back Kyle to take over Jabot.

The Abbott men cannot help but worry that the scandal of JT Hellstrom’s (Thad Luckinbill) death will affect their company.  They approach Phyllis about the situation, hoping they could convince her to resign without a fight. However, that is unlikely to happen.

It’s clear that when the men approach Phyllis, she will fight back. She will tell the Abbotts, in no uncertain time, that she will not resign. The men realize that they will have to plan a hostile takeover.  Jack worries that it won’t go according to plan, but he proceeds anyway.

The Young and the Restless spoilers reveal that Phyllis will tell the men that if they fight her on the CEO chair they will be sorry. She will drag their names through the mud to the media and expose all their secrets.  They were prepared for Phyllis to do that and Jack points out she was involved in a murder and later a plan to cover-up that said murder.  He will say she has no leg to stand on.

Will Phyllis realize that Jack is right and quietly resign?  Or will she fight the Abbotts about the Jabot CEO chair?  Don’t forget to come back to Hollywood Hiccups for more The Young and the Restless (Y&R) spoilers, news, and casting updates!