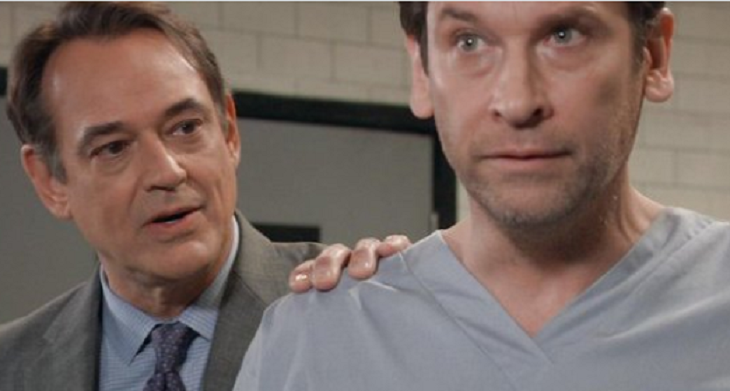 General Hospital (GH) spoilers tease that when Franco Baldwin (Roger Howarth) started telling “Kevin Collins” aka Ryan Chamberlain (Jon Lindstrom) about he and Commissioner Jordan Ashford’s (Briana Nicole Henry) plan to flush the serial killer out, he dialed his burner phone and may have recorded the whole thing to Jordan’s voicemail.

Other GH spoilers tease that Curtis Ashford (Donnell Turner) will retrieve an important voicemail, and that might be it! In addition, other General Hospital spoilers tease that Franco will place another call to Jordan as he flees Ferncliff while clutching his stab wound that Ryan put in his stomach.

Poor Franco, if he did have the phone on already, he’s so freaked out he may have forgotten all about it, but whether the phone was on record or if he’d set it to make a call, it won’t matter. He got away with the phone so Ryan can’t erase anything.

Nurse Kay (Cyd Strittmatter) came just in time for Franco to tell her that Kevin was Ryan, and Ryan tried to bluff his way out of it, and told her that Franco had tried to stab him! After she left, Franco turned the tables and locked Ryan in the cell! However, now Nurse Kay may be Ryan’s victim since she knows the truth….if she believed Franco, did she tell someone else about Ryan?

Either way, Ryan can’t take a chance and he will probably kill her since Franco didn’t get Ryan’s knife! Red-headed nurses don’t seem to last long at Ferncliff! Perhaps it is Nurse Kay that Carly Corinthos (Laura Wright) witnesses Ryan putting in the trunk of his car later instead of Franco.

Will Franco make it to General Hospital or home where Elizabeth Webber Baldwin (Rebecca Herbst) and Drew Cain (Billy Miller) are talking about his interview before he bleeds out? Maybe he’ll encounter Detective Harrison Chase (Josh Swickard) looking for Mayor Laura Webber (Genie Francis) and get to safety that way!

Stay tuned to GH and keep checking General Hospital spoilers frequently to see what happens as Ryan Chamberlain gets closer to his end!