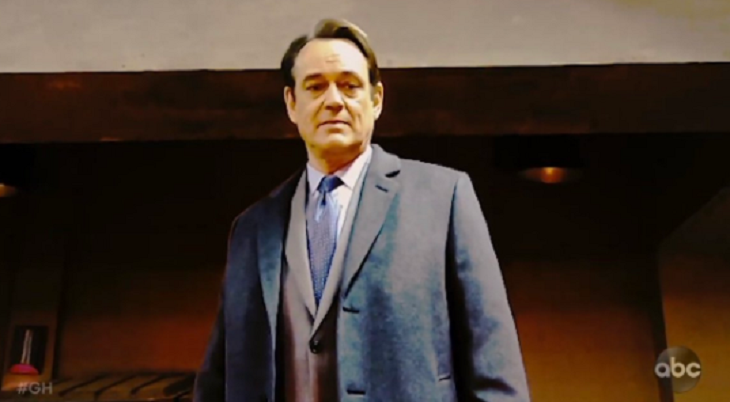 General Hospital (GH) spoilers tease that Ryan (Jon Lindstrom) will continue his reign of terror moving into the week of March 4. However, he will be caught soon, or so it seems. Elizabeth (Rebecca Herbst) is losing faith in Franco (Roger Herbst). Ryan will come unglued and attack and kill again. Will his next victims be Kevin (Jon Lindstrom) and Laura (Genie Francis)? Here’s what you need to know about what’s ahead on GH.

Liz Loses Faith In Her Husband

When Liz witnessed Franco pleading guilty to murder, it was her breaking point. She never thought he would do that. She doesn’t know that her husband has a deal with the police commissioner to flush out the real killer. All she knows is that Franco confessed to killing multiple people, including Kiki Jerome (Hayley Erin).

Help is on the way for Liz. Drew (Billy Miller) shows up to lend an understanding ear and provide some much-needed reassurance that it will all work out in the end. GH spoilers state that Drew will help Liz get the strength to be strong for her kids and remain hopeful that Franco isn’t a mass murderer – at least not this time.

It’s clear that when Franco learns that Ryan is the killer, he will trigger something in the serial killer. He will have an epic meltdown. Things go from bad to worse when Franco manages to get away and Ryan isn’t able to silence him.

Little does Ryan know, Franco has a burner phone that Jordan (Briana Nicole Henry) provided him, and he could have recorded the who confession and sent it to the police commissioner.

Kevin And Laura In Danger

Franco's interview isn't sitting well with Ryan… not one bit. But is he willing to risk everything to keep his legacy to himself?
A thrilling, new #GH starts RIGHT NOW on ABC! @thejonlindstrom #GH55 pic.twitter.com/DkxEW3NMRf

Soaps In Depth suggested that he could lash out at his brother, Kevin and his wife, Laura. Kevin complicates everything and with him around, he will never be able to have the happy ending he wants with Ava (Maura West).

The End Is Near!

Ryan isn’t stupid. He knows eventually he will get caught and have to face his crimes. However, he will not go down without a fight. In his mind, he and Laura are in love and he cannot wait to marry her. Of course, the GH fans know, that marriage will not happen.

Once Ava learns that Ryan is Kiki’s murderer, she will plot his death. She will not stand for anyone, not even someone that she believes she is in love with, get away with killing her daughter.

Who do you think will be Ryan’s next victim? Do you think that Ava will end up killing him? Don’t forget to come back later for more General Hospital (GH) spoilers, news, and casting updates!