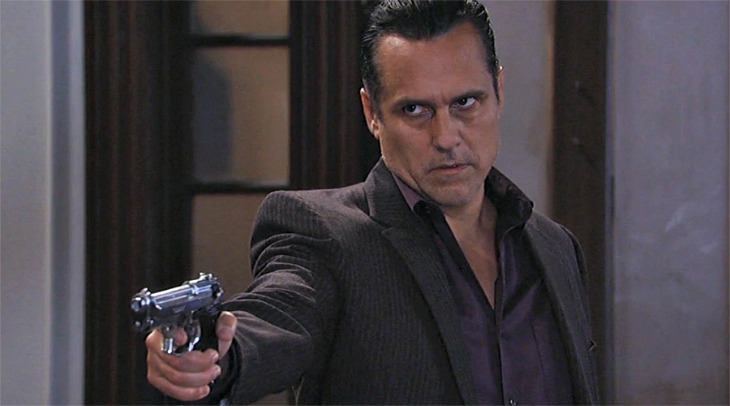 Welcome to your Monday, March 4 General Hospital recap! We begin our day with  “Ryan” (Jon Lindstrom) putting away his victim’s driver’s licenses in his car trunk. Here’s what you need to know.

Carly (Laura Wright) is standing right behind him as he asks what she’s doing there. She said she was walking to her car and couldn’t help but notice what’s in his trunk. Carly says she saw his suitcase and has a few questions before he skips town. She wants to know about her next- door neighbor at Ferncliff, the patient Wilson Ritter. Carly says when she was at Ferncliff going to electroshock therapy, she saw Wilson who looked exactly like him. “Ryan” convinces her that she is mistaken and opens his car trunk again.

The camera pans over Ankara Turkey where we end up in a room with a group of men playing cards. GH spoilers state that Sonny (Maurice Bernard) walks up and asks to join the poker game.

The men are suspicious at first, but let him join in. Two of the men walk away and whisper that they “have a cop in our midst” – alluding to Sonny. The men pull out a gun on Sonny as they begin to fight, suddenly Robert (Tristan Rogers) appears with a gun and identifies himself as WSB. The fight continues as Sonny asks if they know where Dante is.

At the hospital, Curtis (Donnell Turner) has Jordan’s (Brianna Nicole Henry) phone and it says “urgent.” Chase (Josh Swickard) walks up and asks about her condition. Curtis asks if Chase can override her cellphone password to see what the urgent message is.

Chase breaks into the phone and Curtis listens to Franco’s message. Curtis and Chase are wondering what Franco means when he says Ryan is alive.

At the hospital, Anna (Finola Hughes) is leaving a message for Dr. Maddox (Anthony Montgomery) about Jordan’s accident. Finn (Michael Easton) walks up and they discuss where Dr. Maddox is and if he knew she was patient #1.

Anna is worried that she actually may have Alex’s memories. Anna is determined to find out what happened. Anna overhears Curtis and Chase, they explain what they know of Jordan’s plan.