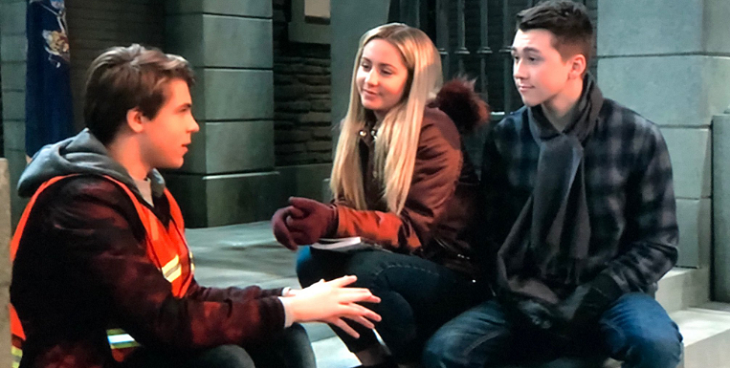 General Hospital (GH)  spoilers tease that Tuesday, March 5 will be full of exciting drama and new mysteries to be solved! First, Shiloh Archer (Coby Ryan McLaughlin) tells Kristina Corinthos-Davis (Lexi Ainsworth) exactly what she wants to hear when he tells her, “You’re a gift to Dawn of Day and to me!” Kristina seems to be drawn deeper and deeper into Dawn of Day and their teachings—–and, of course,  to Shiloh.

Next, Oscar Nero (Garren Lake Stitt) stands with his friends Josslyn Jacks (Eden McCoy), Cameron Webber (William Lipton), and Trina (Sydney Mikayla) and gives them some bad news. He says they are stranded until his car can be fixed! It looks like the teens made it to Niagara Falls okay, but they cannot get home the same day because of either car trouble, or a minor accident that may have harmed the car, but apparently not them.

Speaking of Kevin, he and Laura are desperate for a way out of Ferncliff's basement. @thejonlindstrom @GenieFrancis#GH is brand-new and STARTS NOW on ABC! #GH55 pic.twitter.com/VAVrcEkgES

This is a brand new car, so unless it’s defective, it’s more than likely they had a minor fender bender that disabled the car enough that it’s un-drivable.

At General Hospital, a concerned Epiphany (Sonya Eddy) looks down at a sleeping Franco Baldwin (Roger Howarth) asking if he can hear her; could Franco have survived blood loss and major abdominal surgery only to have gone into a coma?

In the basement of Ferncliff, where the real Kevin Collins (also Jon Lindstrom) and Laura Webber Collins (Genie Francis) just found a secret tunnel that may lead to their freedom, Laura says to Kevin, “We have to report Ryan to the police!”

Kevin responds, “I’m not going with you.” This is probably to make sure she makes it through the tunnel to safety first, not knowing if Ryan could come back at any minute to finish them off. This way Kevin can stall him, even if it’s only long enough for Ryan to finish him off!

Lastly, Sam McCall (Kelly Monaco) talks to Jason Morgan (Steve Burton), telling him, “Maybe I should just bail on the whole thing.” Obviously, she’s having doubts that her plan is working and that Shiloh is not seeing through her ruse!

That’s all for tomorrow’s GH; keep watching the show and check General Hospital spoilers frequently to keep up with all the latest news and developments!